By Matt Patton
As promised, here’s the second half of my article from last week. I threw these together chronologically, so these five films run anywhere from the early 1990s up to more recent fare.

And no, The Dark Knight Rises doesn’t make the list. 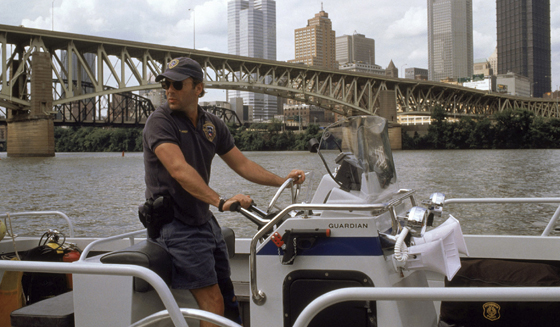 By most accounts, Striking Distance is not a “great movie”. Generally, however, Pittsburghers tend to hold it with a considerable amount of esteem. Starring Bruce Willis and Sarah Jessica Parker, the film chronicles a city cop’s battle with a serial killer known as the “Polish Hill Strangler”. When the murders of the killer begin to get personal for Bruce Willis’s type-cast policeman character, a mystery ensues that is both complicated and enticing. Striking Distance actually uses the abundance of rivers and bridges in Pittsburgh as an effective plot device (like for suicides and boat chases and stuff), which is distinct from typical, run-of-the-mill crime thrillers.

The plot for the film is utterly hysterical: A group of terrorists are holding the United States Vice President hostage during Game 7 of the Stanley Cup Finals. There are bombs wired to explode throughout the building whenever the game ends. Van Damme, a member of the “Pittsburgh Fire Bureau”, decides to take things into his own hands when his daughter is used as a hostage. Fortunately for the writer of this movie, no one will be watching it for the plot.

The entire film is based in the confines of the now deconstructed Mellon Arena (affectionately known as “the Igloo” around these parts). As Sudden Death also takes place in the duration of a hockey game between the Pittsburgh Penguins and the Chicago Blackhawks, there are several actual Penguins players in the movie including Jay Caufield and Ian Moran. Notable Pittsburgh hockey figures such as Mike Lange, Paul Steigerwald, and even Jeff Jimerson also have roles. Oh, and there is a particularly horrifying scene in which Van Damme murders a beloved hockey mascot with his fists.

Dogma has that distinct style that comes with most of Kevin Smith’s films. Jay and Silent Bob, Ben Affleck, dialogue written equal parts vulgar and witty; it’s all here. This particular tale follows two fallen angels, Loki and Bartleby, attempting to get back into Heaven. A descendant of Jesus is assigned by the-powers-that-be to ensure this doesn’t happen. Due to the religion-heavy plotline, there was some initial controversy about the film. This did not show at the box office, though, as it grossed nearly three times its budget. The cast is peppered with stars like Matt Damon, Ben Affleck, Alan Rickman, Salma Hayek, and even the late, legendary George Carlin. This is a movie you should check out on its comedic factor alone, but the fact that most of it was shot in Pittsburgh only bolsters its value.

Wonder Boys may actually be my favorite movie on this list, in spite of the glowing dissertation I wrote on Sudden Death. The film is based on the novel of the same name by University of Pittsburgh alum Michael Chabon (I think that’s worth mentioning). Michael Douglas plays a novelist/creative writing professor at a Pittsburgh university. His first novel was a monumental success and he has since tried to reciprocate this into his next body of work, a two and a half thousand page manuscript that he just can’t seem to conclude. Michael Douglas is far from the only star of the movie, though. Both Tobey Maguire and Robert Downey Jr., who was on parole at the time of the shoot, give great scene-stealing performances. Actresses Frances McDormand and Katie Holmes also have roles. Throughout the film, one can spot scenery encompassing suburban Pittsburgh, the South Side, downtown Pittsburgh, and especially Oakland.

On a side note, Wonder Boys was directed by Curtis Hanson, probably known best for the spectacular crime drama L.A. Confidential. He also directed that PG-rated, Gerard Butler surfing drama. Not sure where things took a wrong turn.

The final and most recent contribution to this list, The Road is actually the only one that I was surprised to find was produced locally, though, I can’t particularly say I’m surprised. Based on the novel by Cormac McCarthy, The Road is a post-apocalyptic drama chronicling the travels of a father (Viggo Mortensen) and son through a desolate wasteland. Much of the film was shot in the Pittsburgh region due its tax breaks and “desolate landscape”. I wish I could say that wasn’t a quote. Director John Hillcoat said of the Pittsburgh filming location, “It’s a beautiful place in fall with the colors changing, but in winter, it can be very bleak. There are city blocks that are abandoned. The woods can be brutal.” Regardless, it’s a pretty good film; and as much as everyone would like to forget, it brings up thoughts of Pittsburgh’s industrial history.

Honorable Mentions:
Some of these movies are good, but maybe not good enough to write a few paragraphs about, you follow me? They’re… mentionable.
Creepshow (1982) – Homegrown George Romero loves to use Pittsburgh as a studio. This short film anthology is no exception.
Flashdance (1983) – A romantic drama about a female steel-worker. It has a soundtrack that would make Kenny Loggins blush.
Waterland (1992) – Directed by Jake Gyllenhaal’s dad! Has a pretty decent cast. Totally not like Waterworld.
Kingpin (1996) – Woody Harrelson plays a hook-handed former bowling champion. Need I say more?
Adventureland (2009) – Almost made the list. Cute, quirky movie. Filmed in Kennywood.