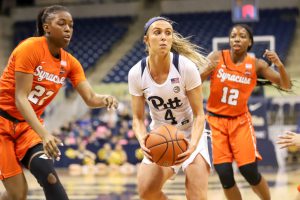 The Panthers became the fourth team in the conference and the fifteenth team all year to fall to Tiana Mangakahia and the offensive scourge of the Syracuse Orange.  Syracuse beat Pittsburgh by a final score of 82 to 50 this Thursday, leaving them still looking for their first ACC win.  Cassidy Walsh led the Panthers as their only double-digit scorer with 13 points.  Although Mangakahia contributed a solid 14 points and eight assists to follow up her impressive triple double against North Carolina, Latvian born forward Digna Strautmane stole the show as she led all scorers with 22 points for a personal career high.

Pitt kept it close in the first quarter, and finished the quarter trailing by only five points.  Kauai Bradley showed off her point-forward skills with two assists and a knockdown three to keep the Panthers in it.  Jasmine Whitney filled up her stat sheet in a hurry as she noticed five points, an assist, a gritty rebound, and a steal all in the first ten minutes of play.  Both teams showed expert defensive discipline to begin the game, but the Orange countered more effectively, and were helped by a flurry of turnovers which led to easy layups at the other end.

The Panthers hunkered down with great defense in the second quarter and held the Orange to just 17 points.  They failed to capitalize, however, as they only put up 16 points of their own and at one point went on a four minute field goal drought.  Walsh put up 10 points in the quarter, including a near buzzer-beating layup with two seconds left in the half.  Besides one jumper made by Jasmine Whitney, the rest of Pitt’s scoring came from the foul line.  They looked markedly improved in the second quarter, but slipped back to 50% on the day by the end of the game.

Freshman Ismini Prapa saw some more minutes of ACC play in the fourth quarter.  The freshman from Athens, Greece made her only attempted field goal of the night.  Prapa only played six minutes, but Lance White made sure that his young players get time to build for the future.

Pittsburgh finished the game down 32 points, 82 to 50.  The Panthers are back January 20th against Clemson.