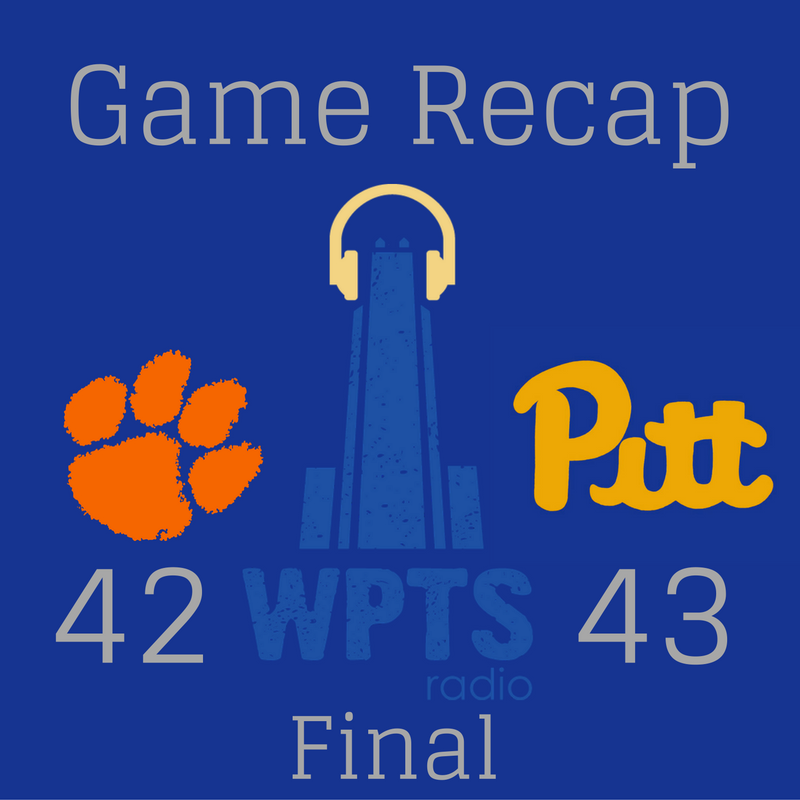 Yes, it happened. Believe it Pitt fans. For the second time in the last ten years, Pittsburgh has defeated the #2 team in the nation on the road. In 2007, the Panthers defeated second ranked West Virginia in Morgantown knocking the Mountaineers out of the BCS National Championship Game. Nine years later in Death Valley, one of the most difficult venues in all the nation, the Panthers have shocked the world once more.

Pittsburgh fans came into this one prepared for the worst. Clemson’s star quarterback Deshaun Watson was probably going to pass for somewhere around 600 yards in his absolute annihilation of the Pitt secondary. Mike Williams would probably receive at least 15 of those passes and exceed 200 yards with a touchdown along the way. That’s what Pitt fans expected. And what is amazing is that all of those came true. Yet when everybody in Memorial Stadium glanced up at the scoreboard after 60 minutes of play, it read Pittsburgh 43, Clemson 42.

It all started with Pittsburgh’s efficient opening drive capped off by a 15 yard touchdown pass from quarterback Nate Peterman to fullback George Aston with 13:08 on the clock. For a Panther offense that has been solid all year, such a quick score was not too out of the ordinary. Sure, against Clemson it’s a bit of a surprise. But any experienced Panther supporter knows not to get excited yet. However, when Ryan Lewis picked off Deshaun Watson in the end zone on the ensuing drive, many college football fans began changing their channels to ABC. Ultimately, Pitt’s charge out of the end zone led to nothing, and the first quarter scoring involved a 1 yard rush by Wayne Gallman, his first of three on the day, a 46 yard pass from Peterman to James Conner, and a controversial touchdown by Gallman to make it 14-14. Initially, officials granted Pittsburgh a touchdown as sophomore Jordan Whitehead had returned Gallman’s fumble 100 yards for a touchdown. But definitive video evidence of Gallman crossing the plane before the drop allowed officials to overturn the call.

Watson opened up the scoring in the second quarter with a 15 yard touchdown to Mike Williams quickly followed by Peterman’s 55 yard score to tight end Scott Orndoff. The touchdown is now the longest passing touchdown the Tigers have allowed all year, exceeding the length of James Conner’s score earlier in the contest. The score that came with 9:33 remaining in the quarter became a vital spot in this game as Pitt kicker Chris Blewitt shanked the extra point right off of the left upright. Pitt trailed 21-20, wondering whether that one point would come back to play a factor in this football game. A major highlight, especially for Pitt fans was Avonte Maddox’s interception with under seven minutes to play in quarter two. Maddox is a guy who has been very unreliable all year at corner, and he could not have picked a better time to make a big play like this as Watson was marching Clemson down the field once again. Pitt closed the drive with a 1 yard touchdown to George Aston for his second of the day making it a 27-21 Panther advantage. Watson was able to counter with a touchdown of his own to Artavis Scott in a drive that lasted 1:14. Pitt was able to put together some quick offense as well, but Blewitt’s 53 yard field goal attempt was blocked to end the half.

The Panthers opened the second half down 28-27, trailing by a missed extra point to the #2 team in college football. Pitt started the quarter strong, forcing Clemson to punt for the first time in the game on their opening possession, but that’s just when problems started to arise. Pitt’s first turnover of the game came as Peterman lost the ball due to an overwhelming amount of pressure from the Clemson pass rush. The play was quickly followed by an arm injury to Jordan Whitehead that would leave him out for the remainder of the game. Whitehead has been Pitt’s most effective secondary player throughout the year, and Watson threw a 27 yard touchdown to Deon Cain on the very next play. Then, Clemson fans were unhappy. Very unhappy. They booed the officials from the seven minute mark until the end of the third quarter. The Tigers were called for penalties on back to back plays, one of which was a very disputable personal foul call on Ben Boulware. The penalties led the Panthers to the Tigers’ 22 yard line and Peterman finished off the drive with another touchdown pass to Orndoff for four yards. Yet, Pat Narduzzi still chose to hold off on the two point conversion, and Pitt still trailed by a point, 35-34. Clemson was able to finish the quarter with another score as Wayne Gallman ran for his third one yard touchdown of the game. Clemson led at the break, 42-34.

For the first ten minutes of the fourth quarter, this game appeared to be over. Pitt just could not get any offense moving, and it seemed as if the Tigers had made the proper adjustments at the half to stifle Peterman’s passing attack. Panther fans had almost given up. Watson led his team all the way down to the Pitt 7 yard line with six minutes to play. Another touchdown would likely put the Tigers up 49-34, and surely the Panthers could not string together two touchdowns in the last six minutes. But then everything about this football game changed. Saleem Brightwell intercepted Deshaun Watson in the red zone and took it back all the way to the Clemson 30 yard line, almost breaking the tackle and taking it to the house. This was Deshaun Watson’s third interception on the night, two of which came in crucial red zone play, all of which came in Pitt’s own half of the field. With 5:17 left to play James Conner rushed for a magnificent 20 yard touchdown in which he started going left before quickly bouncing back to the wide open right side of the field to make it a 42-40 contest. Pitt’s failed two point conversion attempt gave Clemson the ball back with five minutes to play. A few first downs would wrap this game up, and the Clemson Tigers would celebrate a 10-0 record in Death Valley. Watson led the offense all the way down to the Pitt 35 before the Panthers came up with crucial stops on third and fourth down. The Tigers ran the same play on 3rd and 1 and 4th and 1, giving a pitch to Wayne Gallman who was unable to gain any ground on Pitt’s swarming defense. With just a minute left to play, Peterman led his team down the field, highlighted by a 21 yard connection with Scott Orndoff to the Clemson 34 yard line. Pitt would gain a few more yards and then this contest came down to one kick, one player. Chris Blewitt. The same guy who’d missed the extra point earlier in the evening and gotten a 53 yarder blocked now had the game at his foot. And after Dabo Swinney iced him once, Chris Blewitt put a 47 yard field goal right through the uprights as the players on the Pitt bench unlinked their arms and rejoiced on the sideline. The squib kick to follow from Pitt led to nothing for the Clemson return team and this thing was over. Pitt had beaten Clemson 43-42 in Death Valley.

After Pittsburgh defeated Penn State on September 10th, most fans thought that would be the marquee win for the season. Pitt would go into ACC play, win the ones they’re supposed to win and probably lose to the superior teams of the league like North Carolina and Virginia Tech. Clemson would be an absolute beatdown. But the Panthers defied all odds. Pat Narduzzi defied all odds. The Clemson Tigers were 23-1 in the past two seasons before this game. Pitt just defeated a team that does not lose easily. Even when they go to overtime with NC State, or when they go down to the wire with Troy, or when they barely squeak out a win over the tremendous Louisville Cardinals, they seem to always find a way to win. But not on Saturday the 12th in Death Valley.

Pat Narduzzi notched without a doubt the biggest win of his head coaching career in this one, and it will serve as a huge momentum builder for this Pitt team and his tenure going forward. After Blewitt missed the extra point and had his field goal blocked he was visibly frustrated. Narduzzi put his arm around the senior, encouraged him, and gave him a kiss. This is a moment that Pitt fans like myself will never forget. After years of searching for the right football coach, Pitt may have just found it in Pat Narduzzi. An act like that is one of pure class and pure composure as a head football coach. The optimism and positivity in that notion is something that many football coaches lack, and the University of Pittsburgh needs to cherish this guy.

The victory is particularly special for James Conner. Conner missed almost all of last season due to an injury that was followed by his diagnosis of Hodgkin lymphoma. He’s a player that has done so much for this team, this program, and this university. And as his former teammate Tyler Boyd left for the NFL this past season, James Conner took the reigns of a Pitt team that was doubted by a lot of people. To see him get a win like this is just special, and the look on his face after the victory confirms that.

Everything seemed to go right for Pitt to win this game. Though consistent receiving threats Jester Weah and Quadree Henderson were largely ineffective in the contest, Pitt found offense from Orndoff, Aston, and Conner throughout the night, along with some huge plays defensively. This Pitt team is not going anywhere special in 2016. They are 6-4 with two below average ACC opponents left on the schedule. They will very likely end up in a subpar bowl as they typically do. But this win will be remembered for a long time as one of the best games in Pitt football history, and the players on this team will carry it with them for the rest of their Pitt careers and lives. Pitt 43, Clemson 42. Saturday, November 12th, 2016, in Death Valley.