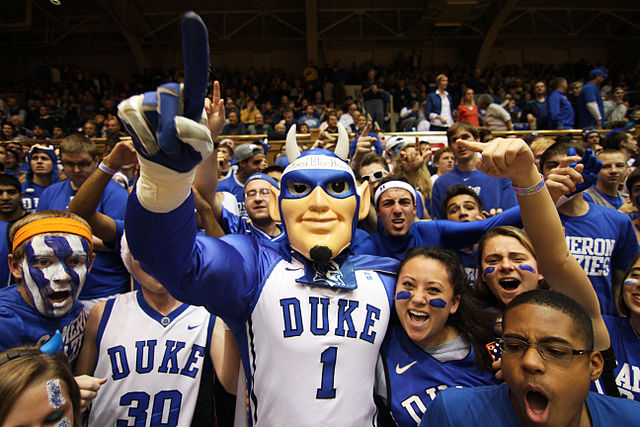 A new year in college basketball is nearly upon us, and Duke and Kentucky top the preseason polls. What’s new? Anyway, there is a lot of excitement being generated around NCAA hoops this year, especially after one of the most entertaining national championship games in years. Marcus Paige’s circus-shot followed by Kris Jenkins’ miraculous buzzer-beater put the UNC-Nova dual right up there with Mario Chalmers’ Kansas magic in 2008. Opening night this year consists of a thrilling pair of Hawaii matchups for the Armed Forces Classic in Arizona-Michigan State and Indiana-Kansas, all top fifteen teams. Get ready basketball fans. The road to March is about to begin.

TOP TEN
1. Duke
The Blue Devils are absolutely loaded this year. Not only do they bring back four returning contributors in Grayson Allen, Luke Kennard, Matt Jones, and Amile Jefferson, but they have a star-studded freshman class highlighted by Harry Giles, Jayson Tatum, and Frank Jackson. Krzyzewski’s deep roster will prove to be extremely effective as they challenge the tough ACC opponents. Allen is in the player of the year discussion, Kennard is one of the nation’s top 3 point threats, and Amile Jefferson could have a big year if he stays healthy. Watch out for Duke, the clear ACC frontrunners to start the year.

2. Kentucky
We are starting to notice a recurring theme with the Wildcats. John Calipari does an outstanding job recruiting and brings in a top five class every year only to lose them all to the NBA after a season. However, that is never an issue as hardwood talent endlessly flows into the University of Kentucky. The Cats have lost nine NBA draft picks over the past two seasons and rarely maintain starters past their sophomore years. Isaiah Briscoe is Kentucky’s only real returning playmaker this year, as the team will rely on its four top fifteen recruits led by big man Bam Adebayo and shooting guard Malik Monk.

3. Kansas
Expect another tremendous year from the Jayhawks. Although this team lost its two leading scorers in Perry Ellis and Wayne Selden Jr., this year’s roster is very similar to the one that notched the top overall seed in the dance last season. Frank Mason III and Devonte’ Graham make up one of the best backcourt tandems we will see in college basketball this year, and incoming freshman Josh Jackson will provide offensive explosion at the small forward position.

4. Villanova
The defending champs lose 12.5 PPG, 4.2 APG, and a court-controller in Ryan Arcidiacono. This is a major loss for Villanova, but the pair of seniors in Kris Jenkins and Josh Hart now take the reigns of this Wildcats group. They should have no trouble putting together another really solid year, especially with another mediocre Big East schedule that provided little concern a year ago.

5. North Carolina
The runners-up are certainly going to miss a double-double per game in Brice Johnson and a dynamic point guard in Marcus Paige. However, Joel Berry II will fully take over the point guard role which he began to inherit last season, while Justin Jackson, Kennedy Meeks, and Isaiah Hicks will all need to be much more efficient in the frontcourt. Look for Carolina to compete for the ACC title once again and build momentum in March. Berry could emerge from an under the radar guard to an elite floor manager in college basketball.

6. Oregon
After watching Oregon’s football program display clear superiority over the past decade, we are finally seeing some excitement from the Ducks on the hardwood. Dana Altman’s bunch earned the school’s first ever #1 seed in the NCAA Tournament last season and beat Mike Krzyzewski’s Duke team by 14 along the way to the Elite Eight. They bring back their star playmaker in Dillon Brooks along with guard Tyler Dorsey. Though Brooks will miss the start of the year due to a foot injury, he could contend for player of the year honors and lead the Ducks to another tournament run.

7. Virginia
The Cavaliers lose the 3rd best scorer in the ACC last season in Malcolm Brogdon along with seven footer Mike Tobey and power forward Anthony Gill. However, London Perrantes is back as the starting point guard for his fourth consecutive year. Isaiah Wilkins and Memphis transfer Austin Nichols will supply the majority of the scoring for the Wahoos. Virginia loses a lot, but Tony Bennett has been outstanding the past few seasons and should be again this year.

8. Wisconsin
Many expected the Badgers to severely struggle without Frank Kaminsky and Sam Dekker last season, but Wisconsin put together a very strong campaign that ended with a Sweet Sixteen loss to Notre Dame. Still, the Badgers were a 7 seed that knocked off second seeded Xavier before falling in the regional semifinal. Nigel Hayes and Bronson Koenig led the way for that team and will do it again this year. Wisconsin is my Big Ten favorite to start the season.

9. Michigan State
The Spartans had a fantastic group last year. A group that nobody saw going out in the round of 64 to 15th seeded Middle Tennessee State. Tom Izzo’s team was coming off of a Big Ten Championship with a lot of momentum that all disappeared in their first contest of the dance. It’s hard to see Michigan State putting together as successful a year without Denzel Valentine, Bryn Forbes, or Matt Costello. Freshmen Miles Bridges and Josh Langford will need to generate a lot of offense for the Spartans to stay atop the Big Ten this year.

10. Xavier
Edmond Sumner was one of the top freshmen in the nation last year for the Musketeers and will provide lots of backcourt value again this year. Leading scorer Trevon Bluiett also returns to a Xavier group that will contend with Villanova for the Big East crown. After an early exit from the tournament last season, look for Chris Mack’s group to bounce back with a very successful year.