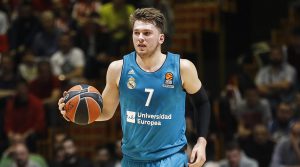 Now that the NBA Draft Lottery has passed, it is officially mock draft szn. Some opening notes: Teams who traded for the pick listed will have an asterisk (*) before the team name. I will give a description of every lottery pick (picks 1-14) and small descriptions on a few other notables.

I know what you’re thinking, “how on earth could they pass on Ayton?” I wouldn’t, but this is a mock draft of how I think teams will pick, not how I would pick. There are two signs you can’t ignore: Igor Kokoskov, the Suns new head coach, coached Doncic for the Slovenian national team, and there are rumors that the Suns will go all in on a max deal for Clint Capela, so with the Slovenian connection and the possibility of having Booker and Doncic play with Capela at center, the pick makes sense.

The Kings had the seventh best odds of getting the number one pick and were the big winners of the Draft Lottery falling into the second pick. When the Suns take Doncic, Sacramento becomes even luckier landing who I believe to be the top prospect in this draft. Fox, Hield, Bogdanovic, Cauley-Stein, Ayton, and cap space would certainly create an interesting lineup looking into the future.

Some have Bagley as their number one prospect in this draft, while some believe his success at Duke was due to the team and coaching around him, plus the fact that he was just better athletically and physically than everyone he played. He will have to adjust to the NBA, but the Hawks would be happy to give him all the time he needs.

Possibly the most talked about prospect on this list before he entered college, Porter committed to Washington but followed his father to Missouri after a coaching change at U-Dub. He looked like the consensus number one pick early last year, but after missing almost the entirety of his freshman year due to injury, he’s fallen a few picks. The Grizzlies are obviously disappointed to fall out of the top three in the draft, but Porter could be the silver lining.

The Mavs have a point guard of the future in Dennis Smith Jr, and they’ll get a long term replacement for Dirk in Jackson. The big man was disappointing at MSU but his athleticism is undeniable. Jackson figures to be the kind of player that will either be a decade long All-Star, or a total bust.

The Magic traded Elfrid Peyton last season, so all signs lead to a point guard being drafted with their first round pick. The Magic will make the unpopular right move and take Collin Sexton over Trae Young.

While I did just say that taking Sexton over Young is the right move, I believe Young has the higher ceiling. We saw signs of his potential last year but mostly early on as Young struggled towards the end of the year. The Bulls will make the flashiest pick of the draft and attract the media back to Chicago after a few years of picks that have really only attracted the Finnish media.

If the Cavs want to hold on to any hope of keeping LeBron, they’ll need to please him with this pick. Bridges, a junior in college last year with two national titles, is a very capable and experienced “3 and D” player which is just what LeBron could use, considering the horrendous shooting and defense the Cavs had this season. It might not be the best pick for the future, but Bridges certainly could become a great NBA player, and they can’t let LeBron go without showing some fight.

Bridges is a terrific two-way player who can guard multiple positions and make plays on the offensive end. He should fit well with or without Porzingis and will start immediately. While point guard is the biggest need, the Knicks take Bridges and give Ntilikina one more year to try and prove he can be the franchise point guard.

The other freshman star from Duke, Carter could’ve been the best player on many top 25 teams, but he didn’t get the same hype as Bagley. The 76ers go “best available” with the tenth pick since their big need is shooting guard and no shooting guard deserves to be taken this early in the draft.

Bamba’s incredible size and talent on both ends will help him be successful on any NBA team. The pick will be made because of his defensive ability, with 3.7 blocks per game last year. With Dwight Howard under contract for one more year, Bamba can show his defensive talent off the bench while growing into a role on both ends.

The Clippers get back-to-back picks, and with one of them they take the Kentucky point guard. He will have to grow on the court and also in the weight room, as he weighs five pounds less than current Clippers point guard Patrick Beverley, while Beverley is five inches shorter. Gilgeous-Alexander has talent and a lot of potential to be the franchise point guard for the directionless Clippers.

With the Clippers going guard with one of their picks, they go big man with the other. Williams is a good athletic prospect for a late lottery pick, with a perfect NBA big man body at 6’10” 240 pounds. He can play at both ends and is a great shot blocker, so with fellow former Aggie DeAndre Jordan’s future with the team uncertain, Williams seems like the perfect plan for the future.

Pretty simple here. The Nuggets’ biggest need is a true small forward, and Kevin Knox is the best player available. The kid’s got a lot of talent (I say kid because he’s 18 years old, one of the youngest prospects in the draft), and he should be able to grow defensively and behind the arc. The leading scorer last season at Kentucky should figure to be a key bench player immediately and could be the team’s long term shooting forward assuming Wilson Chandler takes his player option for next season then walks the following offseason.

Simons is a name you might not have heard since he is coming straight out of high school. He would have been a top lottery pick next year, so the Wizards will see the potential there and have him grow in the G League for a year or two.

A foreign non-lottery pick and the San Antonio Spurs: A match made in heaven. They also might be looking for a small forward with Kawhi Leonard’s situation still not making any sense.

Brunson will make a great backup for Rubio right away with his experience and offensive talent. He will be one of those point guards that’s in the the league for ten to fifteen years as a solid sixth man.

Robinson committed to Western Kentucky then decided to not go to school. Since no one has seen him in action in a year, he will bank off of having a good combine to be a first round pick. The Bulls also have the room to take a chance on a guy like Robinson as they’re clearly planning for the future.

The city that chants “No one likes us we don’t care” adds Grayson Allen to the mix. The move would also make sense with J.J. Redick’s contract being up, and the Sixers could use another three point shooting guard.