“Belly of the Beast” by Citizen Kay – Review 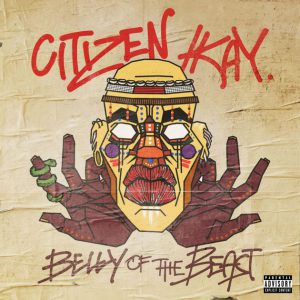 Citizen Kay is a Ghanaian-born Australian raised, artist who has been writing and producing his own music in the public eye since 2013 and has very recently become a favorite of mine among emerging artists. His sophomore album, Belly of the Beast, is a near – masterpiece that uniquely combines the traditionally Afro-American music styles of jazz, funk, and hints of gospel with hip-hop to produce one of the best albums I’ve listened to in a while. Citizen Kay does an amazing job at combining the use of natural instrumentals with synthetic beats and arranging them within the tonal context of his lyrics.

Within much of the album Kay talks about his journey with himself and his ability to grow as a person. He approaches this topic from the complexities of going back to his roots in order to look to the future. He tackles the path he’s walked, going from an insecure kid in “These Kicks,” into an adult that is finding his place in a world where the odds are against him as a Black male in a white dominated society and the odds against his people in the song “Never Again.” This is a story that will resonate well with young people of color who at some point growing up become keenly aware of the fact that they are a minority, and that fact places a large weight on our shoulders in a society where the more you are labelled as a minority, (especially from an intersectional standpoint,) the more the world is against you. The way he portrays this story, is extremely engaging in terms of his rhythmic deliveries alongside music that is often used to convey the Black experience: hip hop and funk.

Kay’s ability to engage with the audience with traditionally Black rhythms and instrumentals is showcased throughout Belly of the Beast. The song “Please Tell Me Bout It” (my personal favorite,) uses extremely funky beats in tandem with his hip hop lyricism to challenge racism in the modern world and creates an almost defiant tone in its confrontation of the topic. The song immediately following “Please Tell Me Bout It”,  “Barred”, is a great example of Kay going back to instrumental roots of this genre to prove the continuity of a present day problem. Here he uses a clip from a “colorblind” Australian, and raps between certain sentences within the clip with an intensity reminiscent of 90s gangsta rap, and the lyrical meaning of someone directly confronting the oppressors in a racist hierarchy.

These themes and instrumentals continue throughout the entire album, while he navigates the racial sphere of the 21st century and his place in it, while he establishes that he still needs to grow as a person, and confronts his relationship with God and his love for the people closest to him as apart of his redemption story. Truly my only gripe with this album is that it almost loses its momentum in the second half. A couple of these songs feel like the rhythm of Kay’s rapping don’t fit properly with the instrumentals, especially in the song “Company I Keep” and a tiny bit in the first half of “Never Again.” Although after the first chorus of “Never Again” the song recovers its momentum and so does the album as a whole. If you are partial to jazz instrumentals used in modern hip hop songs (which I am a sucker for) there is a very nice interlude within the song which creates a more engaging atmosphere for “Company I Keep” overall. These gripes, while they do distract a little from the movement of the album and the arrangement of the songs themselves, do not make the album or its meanings bad overall. In fact, they are the only things keeping it from being a complete masterpiece. Personally I believe that this album is essential for any hip-hop fan that wants to broaden their scope of not only this genre, but get a taste of other traditionally Black music genres, as well as listen to a beautifully told story by a very unique artist.

You can follow Dakota on Twitter @ay__arnold. This review was edited by John Wright of the WPTS Editorial Board.