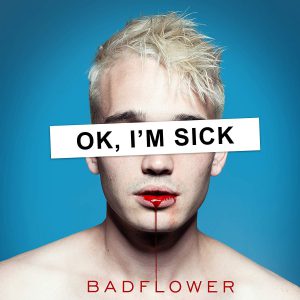 Badflower’s debut album, OK, I’M SICK, was released February 22nd. I had been anticipating this debut for quite some time now, but I never settled on an idea of what I expected from the California quartet. In preparation for the release of their debut album, the band put out four tracks as singles, “Ghost,” “x ANA x,” “Heroin,” and “Promise Me.” Two of these, “Ghost” and “Heroin,” were re-releases. With thirteen tracks all together nearing an hour in length, there is plenty to unpack.

The album as a whole has a dark tone. Throughout the track listing there are songs that cover very heavy topics including suicide, mental illness, sexual abuse, and addiction. The songs attack Trump (“Die”), the Catholic Church (“Wide Eyes”), and even the meat and dairy industry (“Murder Games”). Though many have made claims that Badflower is going to ‘bring rock back,’ Josh Katz, the lead singer, disagrees. He stated in an Instagram post, “We’re not a rock band. We’re not bringing rock back. You can try to categorize us, but we’re gonna continue making art however we please without intervention.” Badflower is not shying away from making music about topics they feel strongly about, even if it turns away some listeners. They’re unafraid to say what they mean and how they feel, regardless of potential reactions from those who will listen.

The second single released, “x ANA x,” dives right into the chaos that comes with living with anxiety, as he fondly refers to the medicine he takes as “Ana.” The chorus shows his dependency on the drug as Katz sings, “Ana you save my soul, you know I love you so.” The second verse is a tangent of Katz’s as he describes anxiety as a sickness, but it is still not widely recognized as such due to the stigma of mental illness. He continues along in this vain as he rattles off how he hates living in the spotlight with this sickness, and that makes it even more unbearable. Later, he sings of the pressures of being famous and knowing people expect him to go on stage and give a performance, but he is terrified that he will crumble under the pressure.

There are two songs on the album that bring about the topic of fear of growing older: “24” and “Promise Me.” These two tracks are approached in very different ways. “Promise Me” follows a story of growing up with someone, watching them change, and ultimately leaving you and the challenges that come with that. “24” is a more introspective look on reaching adulthood. The chorus, “So let me go, so let me die, ‘cause I’m too afraid to be alive. I’m giving up on everything. I’ll miss you all, I always will,” speaks volumes. It is clear that the subject of the song is a fear of growing older. He cares for those around him, but his fear overpowers his love. He looks back at a time that was, in his eyes, better: “At 24 years, I had a heart to play and I was so wonderful that way.” His reflection of this time only reminds him how things have changed and how he wishes they had not. He ends up letting fear overpower his love as he cannot find the strength to return to who he was when he was happy with his life at 24.

“Cry” is the final track. It has a very different vibe than the majority of the album – high energy music with loud, forceful lyrics. Instead, the drums follow a soft gentle beat throughout and the guitars repeat a moody tune. Katz keeps a calm steady tone for most of the song, inflecting his voice in very few spots, such as in the second verse when he sings, “Lump throat, gotta go, you gotta find peace in this broken home.” However, this only adds a larger emphasis on those lyrics. The song is six and a half minutes long, and about two minutes from the end, Katz’s voice becomes gravelly as he screams “You won’t feel the pain” over and over. While he does this, the instruments pick up to match the level of his voice. This abrupt change only lasts about 40 seconds before the song returns to its calmer roots. “Cry” is a beautiful song that perfectly closes out an album that shines a light on so many different topics. Its meaning is not as clear as some of the other tracks like “Die” or “Ghost,” but the fact that the album closes on a song that’s open for interpretation leaves listeners thinking after the final note is sung.

Badflower made it clear through OK, I’M SICK that they feel no qualms about ruffling some feathers. There is no guessing game with them; they tell you who they are and what they believe, and they are not afraid of whether or not you agree with them. They are not playing music to fit someone’s view of who they are. They are taking their own path; if you are along for the ride, great, if not, then it’s your loss. Badflower is not here to make friends or please people, they are here to take action. They simply want to be genuine and make something that feels and sounds right, and I think they did just that with OK I’M SICK.

Badflower will be touring in Pittsburgh March 7th with Nothing More and July 10th with Shinedown.