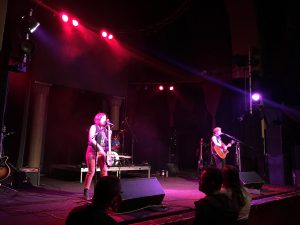 On February 24, 2019, The Accidentals played at Mr. Smalls Theatre in Millvale, PA. They were opened by local acts The Tim Vitullo Band and Ferdinand the Bull.

The Tim Vitullo Band definitely kicked off the night on a strong note. Tim Vitullo’s voice was very reminiscent of Jimmy Buffet, and his band was a mix of modern southern rock and indie pop. The band played about six different tracks, which were an eclectic mix from his older material and his new album, Assorted Train Songs. Overall, this band brought energy and life into the theater and left the audience eager to hear the upcoming sets.

The first thing I thought when I heard Ferdinand the Bull was, “Wow, this group definitely has main stream appeal.” The trio consists of an acoustic guitar, a box drum, and a mandolin. The addition of the former two instruments added an interesting, signature touch to the group’s indie folk image. Talent was obviously beaming from these Pittsburgh natives, and I could totally see them on the indie charts in the near future. Their set consisted mostly of material from their most recent album Painting Over Pictures, and I was extremely impressed with it after I gave it a listen after the concert! 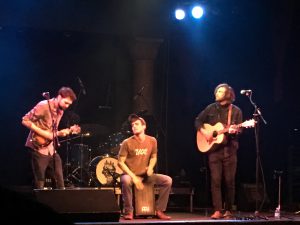 The Accidentals! Where should I even start? This Michigan trio of multi-instrumentalists lit up the room. As soon as they got on stage, the entire audience was up and dancing! This group was recently put on Yahoo Music’s “Top Ten Artists to Watch” and earned a place on Now That’s What I Call Music 69. It is clear that this band is attracting a lot of new fans, myself included!

Savannah Buist, Katie Larson, and Michael Dause played acoustic guitar, electric guitar, bass, cello, viola, and drums. Now how could a trio play this many instruments at once? They must have had more musicians on stage with them. Well, that was not the case. Katie and Savannah would often switch between instruments in the middle of songs, and I was completely mesmerized by their collective talent. Ever member is also a great vocalist! 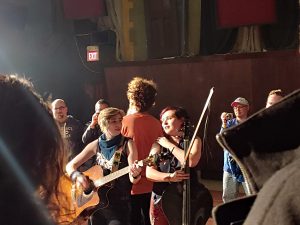 For a relatively new band, The Accidentals sure have released a lot of tracks. They already have two albums and an EP out, and every song told a story. The musicians would sometimes stop and give the backstory of a song, and their personalities and connection to their audience shone through their commentaries. I checked out Odyssey and Bittersweet after the show, and I could tell that The Accidentals are not just great live performers, they are also amazing studio musicians. Their encore consisted of a cover of “Taxman” by The Beatles and a cover of “Tom Sawyer” by Rush, and I have to say, the ending covers really sealed the deal for me, since I am a huge Beatles and Rush fan. Their ending track, on the other hand, involved audience participation. The band came into the audience to sing a duet between them and the concertgoers. It is evident that this band loves to interact with their fans and also has an immense amount of talent. I can’t wait to see what they do next, and give Odyssey another listen!