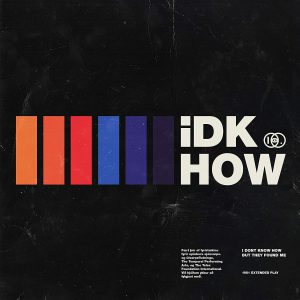 There have been a few watershed moments in my life when it comes to music. When my father introduced me to The Monkees as a child I became enamored with the idea of what music was, and then my introduction to Kansas got me to start truly appreciating the art form. When I was 16 years old, I realized that most of my favorite bands were either incomplete or would be soon, and that I wanted the ability to see the artists that I loved in a live setting. It was finally the time for me to start listening to modern music and develop my own tastes instead of simply listening to what I grew up on. The first bands that I got into were The Fratellis and Whitney, who I am big fans of to this day. For the next year, though, I was content to alternate between about 6 albums and not do much in the way of searching for new bands. That all changed when I heard the song “Choke” by I DON’T KNOW HOW BUT THEY FOUND ME.

Funnily enough, I don’t actually remember how I came across “Choke,” but it inspired me to start a process that I have repeated a few times since. On February 12th of 2018, I was unable to sleep and the song was going through my head, so I decided to make a playlist based on it. I made for myself the rule that I had to create a playlist of artists who I had never heard before and I had to limit myself to one or two songs per artist. I ended up with 46 songs by some of my now-favorite bands, like Weathers and the Technicolors, and a newfound passion for the discovery and sharing of new bands. The past year has seen a dramatic shift in my consumption of music as I have deep-dived into the vibrant world. Even still, the gateway influence of iDKHOW (and the Brobecks) makes them one of the most important bands I’ve come across.

iDKHOW is composed of bassist and vocalist Dallon Weekes and drummer Ryan Seaman. Weekes formerly led the Brobecks and later became a member of Panic! At the Disco while Seaman was the drummer for Falling in Reverse and assisted on many of Weekes’ solo projects. They began performing live as a duo in late 2016 in secret to avoid exploiting their name recognition as the band developed.

With an introduction similar to an audiobook, music videos styled as lost broadcasts, and pre-worn album artwork, iDKHOW’s 1981 Extended Play is the musical equivalent of a “found-footage” film in a way. This strong sense of aesthetic is a core part of the band’s DNA and is apparent in just about everything they do, from the music to the way they interact with both fans and the press. This allows them to be easily identifiable in the crowded sea of artists, but it also helps to show that the band is first and foremost a passion project. This passion can be felt through each of the following tracks as the duo delivers hook after hook on the incredibly catchy EP.

The five tracks-proper are composed of previously released singles “Choke” and “Do It All the Time” in addition to “Bleed Magic,” which was released shortly before the EP. These songs, as well as the two new additions, are all suffused with nostalgia, interesting instrumentation, and sing-along choruses with biting lyrics to create music that is both fun and memorable. Each of the songs are very enjoyable and are stand up tracks in their own right, but the new song “Absinthe” is perhaps the most impressive. It opens with cracking drums and a rush of voices before dropping out to let Weekes sing along a sharp piano. These builds and cuts are prominent throughout the entirety of the song, constantly holding you at attention. Much like the rest of the EP, much of what is on display is fairly simple, but everything falls into place due to the immaculate production and songwriting. The lyrics are clever, and while they might not hold the sharpest criticisms we’ve seen, Weekes delivers them with exceptional sarcasm and wit rather than mere cynicism.

It is extremely easy to like iDKHOW, as they are clearly two friends that are having a lot of fun. One has to look no further than their name, a reference to the classic film Back to the Future, to see that. Featuring jokes in their music videos such as the “fun noises” or the poor pantomiming of their instruments and a song dedicated to the fact that “Nobody Likes the Opening Band” it is clear that they intend to help the audience to have fun too. They make music that can either be listened to or experienced, and both ways are right.

Final Thoughts: iDKHOW is an all-around enjoyable band to listen to, and 1981 Extended Play is no different.