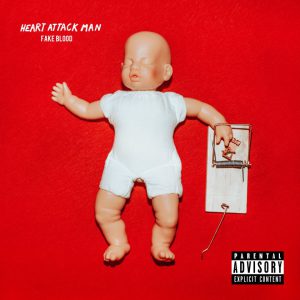 The collective angst felt by the Millennial generation has manifested in a myriad of music genres which each capture a different perspective of this feeling. Heart Attack Man was able to channel a dark, anger-driven version of this energy in their sophomore LP, Fake Blood. Picking up right where their 2017 album, The Manson Family, left off, the Cleveland-based four-piece group revisit similar themes, but with completely different emotion behind them. Their first album contained introspective lyrics alongside a feeling of longing, but Fake Blood demonstrates a stronger, more raw range of tone.

The straightforwardness of the eleven-track album is almost shocking upon a first listen, thanks to the intensity of the lyrics and instrumentals. Fake Blood dives headfirst into feelings of anger, frustration, detachment, and resentment; all with no-nonsense ferocity. Each song is very deliberate and calculated – lyrically, melodically, and tonally. Be warned: the lyrics of many of the songs are very dark and at times even violent, but they make the album stand out. Heart Attack Man has no fear of exploring subjects that are infrequently written about, but universally understood (see: “Cut My Losses” and “Crisis Actor”). The lyrics are also direct – there are no guessing games as to the meaning of any of the songs, which adds to the success of the album as a whole. The power emanating from each and every song cannot be lost on the listener. While the majority of the songs are loud and angry, there are two slower songs (“Moths in a Lampshade” and “The Choking Game”) that still match the unapologetic frustration expressed throughout the album.

Though the first word that comes to mind when describing the overall tone of the album is “angry,” after a few more listens through it becomes clear that the album is nothing short of “anthemic.” I’ve never seen such an honest interpretation of millennial angst that’s so unorthodox, all in the absolute best way possible. There’s truly nothing like Fake Blood out there, and the more I listen to the album the more it blows my mind. I can’t stop listening to this album because of how real it is without coming anywhere close to cliché. Like the penultimate song, this album is absolutely not “Sugar Coated.” The levels of grit and frenzy that weave in and out of the album drive home the turbulent feelings that provide its foundation, but Fake Blood’s sense of urgency, contrasting with its borderline-indifferent lyrics, provides a surprising sense of cohesion.

Overall, this album is a win. It’s everything you don’t want to hear, presented in a way that you can’t stop listening to. It can’t be argued that this isn’t a dark album, but there are hints of optimism and humor sprinkled in. I can already tell that this album will be among my top ten albums of the year, if not my number one.