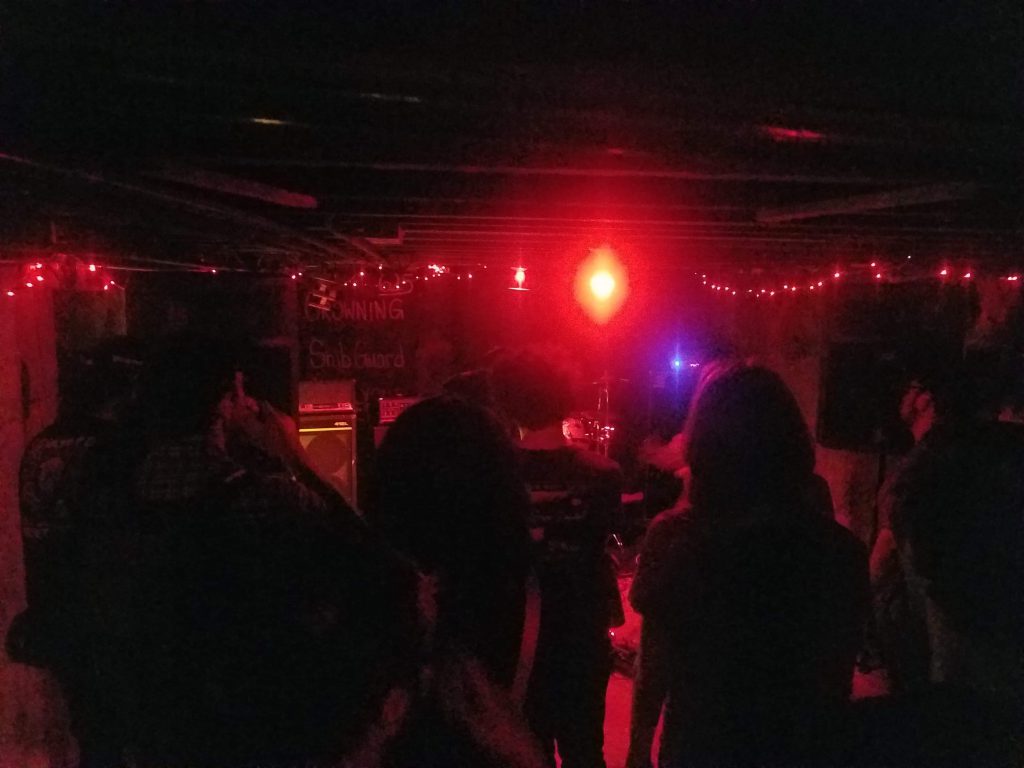 Three tacos and a large horchata were satisfying my five-minutes-late stomach, but the opening trio’s sheer wave of sound was what really put me onto my sound photon bed. Frail Body was the opener and the audience seemed to be very pleased with that decision. Their boomy yet technical, instrumental sound was able to lift anyone off their feet. The audience fought that urge by head banging and throwing their arms to the music. Frail Body’s sound included long interludes of timid solos that split up rhythmic strums of energy. Their vocals caused the audience to gain control of their bodies within the sonic waves and dance with the band.

For Your Health followed the set starting out fairly mild in between audio alterations as if the sound check had not ended. They had interludes telling jokes from their song titles and about audience interactions from their Thursday show. These songs seemed as if they were sprinted through and their set finally began with hefty and unique moshing. Chanting of one of their current news headline-driven titles pursued. The audience’s moshing reached its peak as the band responded to their request. Though the moshing peaked, the performance did not. With a development of presence and artistry, the singer began to own the show. his body and artistic decisions mimicked the sound professionally. His energy started to scream instead of his voice the band concluded the set with a screaming guitar amp, a mic hung from the ceiling, and the singer gone.

Shin Guard was the third set (their name within the chalked lineup was written as “Shib Guard”). The lead guitarist played with For Your Health but was not showcased as much as they were in this set. You could tell they felt natural in this habitat due to their quick sound check and eagerness to start. Their show was different than For Your Health. Before almost every song there was a sample that introduced the story or style of the song. There was no time for improvised banter or acts of audience interaction because of how well rehearsed their set was. Shin Guard’s technicality and skill lead the field that night. It is becoming more and more well-known by listeners that Shin Guard is not on the average level of skill most DIY bands are. With the help of the hungry crowd, scarcely red light basement, and the basement’s surprisingly terrific acoustics and sound, Shin guard proved their prestige and put on a constantly entertaining set. The individual skill of each instrument showed with confidence, and at this point my food was well digested. My body was lost in differentiating yells that bellowed and guitar riffs that twisted and turned as if to knock me off my feet trying to reconcile what just happened. My amazement and thrashing continued throughout the rest of their perfectly-length set.

Lastly was Crowning. they were local skramz that seemed to please the audience. At this point in the show, my body and ears almost had it. I decided to listen from the back with the ear plugs I use for construction sites as my only source of ear protection. Though all of their songs sounded similar possibly due to my ear plugs, I was skeptical. The audience seemed to love it and was jumping more than moshing to this band. Once their shorter-length set ended the audience had no rush to leave the venue.