A Moment Together: Odesza Concert Review

Article and Photos by Emma Cave

“Do you know that story about the Russian cosmonaut…”

The room is dead silent. 500 people holding hands, attention encapsulated by the voice in front of us.
“So, he goes up in this big spaceship”

The lights overflow, eating away at every bit of darkness that remained.

“And he’s got this portal window and he’s looking out of it”
Two silhouettes appear.

And all the sudden, the music erupts in my chest. 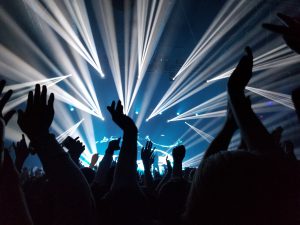 The lights pan down to make way for the breathtaking visuals that have everyone’s undivided attention. 500 pairs of eyes follow as the images flawlessly blend from psychedelic inkblots to hyperreal crystal formations, all a perfect complement to deep bass pulsating through the air. Odesza proceeds to do what only they could pull off, as they mix songs old and new, songs that evoke memories of both my past and present, into harmonies of a new experience. In the crowd, the energy of countless souls could be felt, each one with a different connection to the music being played before us, but all were just as meaningful.

Maybe it’s because everyone in the room was collectively dying of heatstroke or maybe it’s because we could all anticipate every beat of every song, but something about the experience of a concert brings out a breathtaking resonance…

Confetti swirling around us, beats coming from a mixture soundboards and massive drums, holding hands with my sister, it felt like the only thing that existed or even mattered was that moment in time. No one thought about the responsibilities that plagued their conscious, no one thought about that fight they were having with their friend or family member, no one cared that this was probably the first and last time we would meet each other. It was the experience of the show that turned a room full of strangers into family. Maybe it’s because everyone in the room was collectively dying of heatstroke or maybe it’s because we could all anticipate every beat of every song, but something about the experience of a concert brings out a breathtaking resonance amongst humans that’s rare to find anywhere else. These emotions of unity are what I find myself holding onto and thinking about far beyond the ending notes of a set because they evoke a sense of being at utter peace with the chaotic world around me. I think about how at that moment, we were all there for the same reason, listening to that song and dancing with the people we love most, and somehow everything just made sense. In the ends it’s that feeling, the feeling of complete bliss, the feeling of a group of people being collectively lost in the beauty of a performance, lost in the beauty of life, it’s the thing about music that continues to blow my mind.