Sometimes the world is way too scary. It’s easy to feel powerless and lost in the shuffle of a life passing you by- especially in today’s cultural climate. Titus Andronicus’ A Productive Cough is a jaunty, uplifting ray of light tumbling from within the dark cloud of today’s reality. Speaking from his traditionally blue-collar perspective, Patrick Stickles highlights his equally coarse and gentle humanity in day-to-day living despite looming existential dread. Titus Andronicus feature a plethora of country-folk tropes on their latest release, and they make use skillfully enough to overpower my usual cynicism towards country music. From shredding fiddles to deep masculine voices stained with southern accents and bouncing basslines, it’s almost as if this album shouldn’t work as well as it does. But man, does it slap.

Throughout the album, we see Stickles attempt a reclamation of traditional country sounds. “Real Talk,” an ode to struggle, features a hypnotizing and traditional 8 bar blues structure with a chorus of rowdy voices. This track could play in a stadium or a saloon, and nobody would bat an eye either way. Despite this return to a country sound, the lyrical content remains extremely relevant to today’s world. Stickles’ raspy voice repeatedly spits out, “If the weather’s as bad as the weatherman says, we’re in for a real mean storm.” However rather than constructing a sad song about fleeting issues, Stickles welcomes us into his nuanced perspective. He sings, “If the times are as hard as folks are saying they are, some folks have it real, real hard/Can’t even get a break, forget about getting ahead–you bet they never get too far/If the people upstairs acted like they even cared, I’d crack a real wide smile/But I’d have to guess, to witness something like this, you’d have to wait a real long while.” Despite the thick, complicated feelings apparent in the lyrical composition, the song remains buoyant and fun to listen to. It’s one of my favorite tracks on the album.

“(I’m) Like a Rolling Stone” is an incredibly well-done tribute to Bob Dylan’s famous gritty performance of “Like a Rolling Stone”. The idea of reclamation and ownership of sound ring true in both Dylan’s performance and the Titus tribute. Stickles also name drops current and former members of the infamous rock band The Rolling Stones, something that I personally read as a message of perseverance and hope for the future. The drive and passion in the song’s performance make all 8 minutes magical in their own respect.

However, A Productive Cough is not without its dull moments. “Crass Tattoo” loses a lot of energy, and while it admirably explores a different aspect of the country sound it stands out in stark contrast to the rest of the album. This is a deep shame, as Brooklyn musician Megg Farrell’s voice could have done such great things when confronted with the same tempo present on the rest of the album. “Home Alone”, though fun to listen to with its hurtling bluesy instrumentals, departs from the incredible lyrical content featured in the rest of the album. While repetition certainly has its effective place on the album, using the same 4 sentences for 8 minutes is a bit over-kill for this reviewer.

Despite these slight lapses, I enjoyed A Productive Cough as a whole. It’s important to ensure music is meant for everyone, and that genres don’t become lumped into the stereotypes artists tend to fall in. While I can’t say I’m a fan of modern country music, Titus Andronicus certainly has me questioning the direction country music can head in. And that alone is quite a feat. 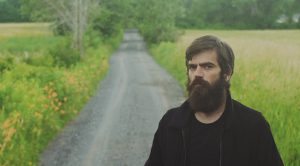 Patrick Stickles, the patron saint of risk-taking, follows up 2015’s sprawling, five-act punk opera The Most Lamentable Tragedy with heavily alt-country, and heartland-inspired U-turn. The sixth studio album of the New Jersey native’s philosophical punk project, Titus Andronicus, sees the group leaving off the “dimed out” numbers any fan knows they are capable of. Instead, A Productive Cough is filled with slower tempos, gorgeous brass and woodwind arrangements, and more focus on Stickles’ poetic lyrics than on any other release. Despite Titus Andronicus’ overt literacy and musical awareness, this decision is still a curveball for a band known for its punk ethos and anarchist ideals.

But sacrificing the frenetic energy they are known for pays off on Cough: not only are the sonics of this album patiently crafted and genuine, but the long-form lyrical style taken by some of the tracks allows for stream-of-consciousness style vocals, delivering ripe political and societal commentary that Stickles is no stranger to. One of the greatest moments on this release is the first track, “Number One (in New York)”: beginning as a chorus-less piano number with hints of clarinet and saxophone, it gradually and deliberately blooms instrumentally as the political and personal state of 2018 is deliberated and grieved over. Titus Andronicus projects are no strangers to impactful ballads, but this album takes it to another level, putting the songwriting involved for each of the seven tracks into focus. This goal is achieved above instrumentals rooted in blues, with moments of gospel influence, for a unique sound rooted in the sound of classic rock without sounding predictable or washed up.

The risks taken by this album make it incredibly fun to listen to, and the runtime flies by every time I listen to it; however, it is most definitely not without flaws. To complement the bluesy aesthetic of Cough, a few times there are some weird hype-man moments/twangy adlibs performed by Patrick Stickles’ cousin that frankly add nothing but discomfort to songs. On “Real Talk,” they are laughable at best, and eye-roll-inducing at their worst. The choice to include these is ridiculous, but the deep voice does not deter from the heartland feel too much. Another red flag that arises is the decision to include a near nine-minute Bob Dylan cover on a seven-track album; but this ends up working out quite well, the loose feel meshing with the blue-collar without a hitch. The lyrical adjustments also make the track much more personal than a straight-up cover, and make sense for Titus Andronicus, a band proficient in ceaseless cross-referencing of literature, television, and music within their lyrics.

Overall, this album works: the sound is a large departure from anything else in Titus Andronicus’ output and is held consistently to make A Productive Cough is sonically cohesive to its palette, and very original for a punk band, every song much closer to Bruce Springsteen than the Ramones or even the Fall. Alongside some of the group’s other masterpieces in metaphor, like TMLT and my personal favorite, The Monitor, this album feels a little bit deflated conceptually, putting this release more in the status of an EP or bonus collection of songs than a full LP. However, I can’t help but appreciate how brassy Cough is in the context of their discography, and I have no doubt these tracks will be an important stepping stone for Stickles’ songwriting, leading to another excellent Titus work in the next few years.

You can tune in on Sundays to hear Dustin host “Fine… whatever” from 6 to 8 PM on WPTS Radio. This review was edited by John Wright of the WPTS Editorial Board