“A Short Story About War” by Shad – Review 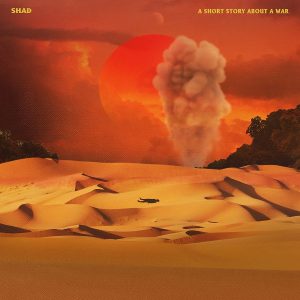 The story of the album is that the world is at war. This world seems to be a fictional one, but one that shares many parallels with ours. It follows a young man who becomes a sniper to make something of himself as well as for protection. In the song “Stone Throwers”, the fighters are introduced as stone throwers in this massive war that are fighting with primitive technology and seems to live in poverty. The story then shifts to “The Fool,” an unarmed hippie that just wanders the world. Also introduced are Revolutionaries as well as an Establishment, although it seems in Shad’s eyes that both are equally bad. There doesn’t seem to be a true hero of the story. The sniper does what he has to do, the stone throwers seem to have some sympathy from Shad, and the fool just seems to be ignorant. What this does though is seemingly cover the bases of all the factions involved in a conflict. It takes an individual perspective as well as groups. Looking at many issues from different angles makes the album very powerful.

The album’s end relates what is going on now and how it relates to the rest of what Shad has said. This album says a lot that rings true. It seems like a real and accurate analysis of the world we live in and what is said seems intelligent. One of the most interesting things that I see in this album is that Shad hardly uses any curse words or slurs. This Hip-Hop/Rap is clean and that is something I almost never see in this caliber of music. It really adds to the album because it means that every word he says is chosen carefully, and he wants everyone to get his message. He reminds me a lot of Lupe Fiasco, trying to discuss the issues important to him in his work, uncaring what the rest of the world thinks about it. Some may say the revolutionaries are right, some may say the Establishment is right, but Shad isn’t afraid to say he sees it all as wrong.

One criticism is that some of what he says are references to other artists in songs. This doesn’t really take away, but it is just something to be aware of. Overall this album can bang when it needs to, but most if not, all songs have important lyrics. I would highly recommend sitting down and focusing to listen to this one but luckily you can listen to it casually too. I am a fan now and will look more into Shad in the future and I recommend you do too.