On February 4th Adult Mom came to the Mr. Roboto Project on their tour with Chris Farren. Having released their album “Soft Spots” last year, WPTS Radio was very excited to talk to their front-person Steph before the show. 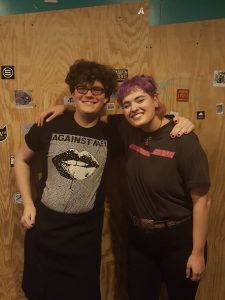 Thomas: So your tour just started. How’s that going so far?

Steph: It’s been going really well. We started with college shows which were funny and interesting, they’re just so different than normal venue shows. And then we did a sold out show in Brooklyn which was amazing and magical. Now we drove from New York to here and met up with Chris [Farren] today.

Thomas: Where did the name “Adult Mom” come from?

Steph: So me and my friends call each other “Mom” a lot, or used to all the time, kind of like a colloquial thing, and I’ve always been the mom of the friend group, so I’ve been very comfortable with that kind of name or identity or whatever. I was a freshman in college, so I was coming into being an adult of some form, so I thought “Adult Mom” had an interesting ring to it.

Thomas: As a queer artist, do you ever feel like your music gets attention for being “queer art” as opposed to just being your work. Like you’ll have people recommend a band saying “Oh this band’s really great because their front person is queer!” but you never really see people say “You should listen to this band because they’re straight.”

Steph: I think it’s interesting, I don’t really feel that we, or I, have been specifically tokenized that much. Definitely it’s a thing, But I feel very intense about the label of “queer music” because it’s not really a genre. And it’s kind of the same, before I came out as non-binary, we were always labeled as “a girl band” or “girl rock” or whatever, like “female fronted.” So yeah, it can be an interesting line. I feel very comfortable with the label of “queerness” as myself and I feel very comfortable with people associating queerness with our music because it is so personal and it is what I talk about a lot in the music. So if I wasn’t talking about it then I feel like that would be kind of cachet like a marketing term.

Thomas: So it’s not just a label on your music, it’s the things you’re talking about because it’s your experience.

Steph: Right and that’s why I feel ok about it.

Thomas: Do you have a favorite song to perform live?

Thomas: Going back to the idea of labels, I know a lot of people label “Adult Mom” as a project, as “bedroom pop,” but you record in a studio now or at least, you’re not recording in your bedroom, so how do you feel about having that kind of label to your music, when that doesn’t represent what you’re doing now?

Steph: I totally understand the label, because it was a GarageBand project, that was only on
Bandcamp, and I would literally record in my room. But yeah, obviously that hasn’t happened in a very long time and that’s for only demos and stuff. So I feel like the term, again, is a marketing thing, and I feel it’s synonymous with “cutesy.” Which is another term that I have a lot of trouble with, like navigating what that is and how I feel about that. So I don’t know how I feel about it.

Thomas: I feel like that goes back to the whole, before you came out as non-binary, being labeled as a “girl band.” It’s kind of like the same thing with “Bedroom pop” where, whenever I hear it is always described as “Oh, this is X cute female group” and that doesn’t really describe you now for a multitude of reasons.

Steph: Right no, that’s so true. I feel like it’s definitely associated with femininity so yeah, I agree.

Steph: I have met so many musicians through twitter. Or at least, if I meet a band at a show, it’s a way to stay connected and I feel it’s kind of a thing where I’ll know of a band because I’ve seen them on Twitter or something and I’ll see them and be like “Hey I kind of know you!” It’s like this weird socializing thing which I guess it was intended for. But I think it’s great also to be able to talk to people that listen to the music and be able to have an approachability of just talking to other people, that a lot of other platforms don’t have.

Thomas: Yeah that makes a lot of sense. I was thinking about that, before this tour, when I’d see a lot of tweets between you and Chris Farren. It’s just like, it seems less than a big monolith of “This famous person is coming to Pittsburgh and they’re playing” instead it’s more of “It’s just a bunch of friends who want to have a good time.”

Steph: Exactly! And that’s what I love about it. And there’s definitely this weird thing where it’s like I never want it to be like I have this circle, where I only talk to musicians. It’s just something that’s just such a presence in my life and that’s how it works out. Yeah I mean, Chris and I became friends on twitter basically, so it makes a lot of sense.

Steph: I mean, it really varies. Truthfully I think there’s a lot of variables. For instance, if I’m playing solo, I really love playing basements and living rooms and people’s houses because it is in itself such an intimate experience and I like sharing that space with people and being able to socialize and talk to people directly. With the band stuff I super appreciate basement spaces and DIY spaces, but there’s also this really like… settling thing. Playing at venues is nice because it sounds really good, or I can hear myself in the monitor, stuff like that. And it’s also more organized in different ways for the artist. But then there’s a lot of things I hate about venues that I love about DIY spaces, basements, and houses. So it can vary.

Thomas: Do you have any kind of musical influences you go to right now whenever you’re writing or recording?

Thomas: Yeah, I feel like musicals are one of those things that people will discount for being musical theater. Like I’ve listened to musicals because my older sister is into musicals so like, I know Fun Home, I know that from my sister. You don’t always have that connection from a lot of music.

Steph: Yeah, I grew up in theater and I’m writing a musical now so I’m just very about musicals and I feel they are able to communicate, or a good musical is able to do the same thing an amazing rock, indie, or hip-hop record does. In that, it is extremely vulnerable and communicates, and sometimes it’s so much more direct because they’re talking to you directly. So I really like the multifacetedness of musical theater.

Thomas: Building off that question of influences, whenever when you were younger as a child, or teenager, were they any musicians or bands that had a lasting impact on you?

Steph: Definitely the Cranberries and Alanis Morissette. I’ve been listening to “Jagged Little Pill” for so much of my life because my dad would play it every car ride possible when we were kids. So that record is just seared into my brain and I love it still. And then The Cranberries is a similar thing. I’ve been listening to them my whole life and I was really sad when Dolores passed away .

Thomas: I only have one more question which is what kind of stuff are you listening to now whenever you’re driving or just not playing music at shows?

Thomas: So thank you so much for doing this. If there’s anything else you’d like to say?

Steph: That’s it, thanks for interviewing me!