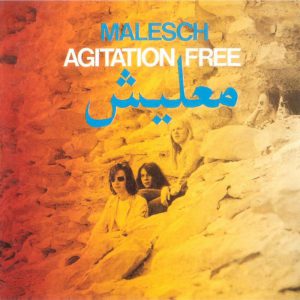 Krautrock: a quasi-pretentious critical branding of German experimental music tracing back to around 1967 that is characterized by blending progressive rock with various aspects of ambient, world music, and sound collage. The genre is home to visceral, percussive grooves both brief and accessible, in addition to sprawling, psychedelic soundscapes often stretching far past the ten-minute mark. Due to its repetitive and texture-based nature, it is oft cited as a forerunner to electronic music, especially the famed krauters-turned-button-pushers, Kraftwerk. The holy trinity of krautrock projects to most is probably Can, Faust, and NEU!, however there is a vast web of obscure groups sprinkled throughout the 1970s that explored every corner of this addictive style. Today, I will be writing about the 1972 debut of Agitation Free, Malesch: an ambitious and free-flowing release inspired by the group’s journeys to Egypt, Greece, and Cyprus.

Between the group’s founding in 1967 and this album’s recording in the early 70s, Agitation Free had already lost two members to Guru Guru, another kraut group, and Tangerine Dream, an incredible electronic act with lots of spacey goodness. Down half of the original group with a handful of lineup changes already under their belt, it’d be unsurprising if Malesch were an uninspired, unremarkable collection of songs; however, the album is anything but. Immense technical skill aside, the album boasts insanely daring production choices paired with a consistently phenomenal rhythmic backbone. While you might expect these ingredients to be found in most articles of krautrock at this time (Can’s experimental opus, Tago Mago, was a year old at this point), what sets Malesch apart is its cohesiveness: not only does the group commit to its pronounced world influences and electronic experimentation throughout its 40-minute runtime, but the elements and songs bleed into each other, giving each listen a united, nearly devout experience.

The album kicks off with what seems to be a found recording of a pilot (“…you going to play for us today? I fly the airplane, and you play for us, deal?”), before Malesch “takes off”, so to speak. Droning synth takes over the sample, eventually joined by bass searching for some sort of rhythm in the keyboard’s low hum. With the addition of stereo-mixed drums, bongos, and strange rattling sound, a guitar bubbles into the mix and the song builds to a frantic climax. From whence it came, the track ends being overtaken by a wave of blurring wind and foreign field recordings that subdue into the silent, oscillating clicking pattern of Malesch’s second song. In one of the biggest feats of patience on the album, and very reminiscent of a lot of IDM of the early 2000s, Agitation Free develops a swirling, psychedelic soundscape that double-times into a rapid guitar solo. A wave overtakes the track, and the next transmission, “Ala Tul,” enters with jazzy drums and 20th century-classical-esque organ and marimbaphone stamping along to the beat.

Ending the record’s first side, the tuned percussion of “Ala Tul” fades, which is greeted by the noisy keyboard backdrop of “Pulse.” The rest of the group joins gradually for some of the most rhythmically-focused playing on Malesch, in what feels like a breather or brilliant intermission. The music cuts out, leaving the echoing drums and chanting vocals of “Kahn el Khalili” to fester. Perhaps my favorite moment on the album, the simple, yet calculated percussion here feels like a direct precursor to a lot of the tribal noise music of the 2000s, especially Black Dice and Animal Collective’s Hollindagain. Guitar glides into the track to guide its melody, setting the tone for the classic krautrock feel to Malesch’s final two tracks, that fade into blissful emptiness.

All-in-all Malesch is a wild musical achievement, with flawless pacing and sequencing that gives the illusion that the group had at least a few releases leading up to it to hone recording chops. To me, the album manages to find a perfect balance between raw, driving moments and floating, trance-like ones. I’m not sure why such a masterfully-performed work seems largely ignored in a lot of conversations on its genre, but hopefully this writeup inspires you to give this forty-minute journey of a release a try.

You can tune in to hear Spencer host “Out There” Thursdays this summer on WPTS Radio from 6 to 7 PM . This review was edited by Nick Jacobyansky of the WPTS Editorial Board.