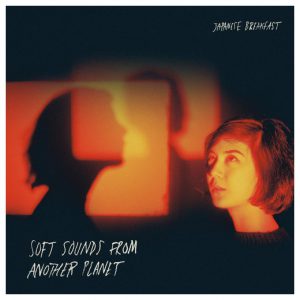 Last year, Japanese Breakfast, the project of Philadelphian Michelle Zauner, quietly released Psychopomp, an album that subtly addressed love and loss, while displaying an interesting take on current indie rock. The album had Zauner’s catchiest hooks yet, improving on her songwriting from her tenure in similarly Philly-based Little Big League, while showing a lot of promise for her future releases with its constantly mutating guitar melodies living within a reverberated atmosphere. Soft Sounds from Another Planet encapsulates the raw songwriting talent we have seen from her, and diversifies her sonic palette even further, to create a truly whole work. Michelle begins by guiding us through a space-inspired trip of ambition and insecurity, and in place of the bubbly production and sweet melodies we’ve seen before, we get grooving rhythms and grittier vocals. The sweet and blossoming choruses of her prior work are still present in spades, especially in songs like “Boyish”. The second half of this album extends on the themes of insecurity, coming to terms with the grief that haunted Psychopomp, as a more somber sound begins to engulf the album. This anti-climax peaks with the (almost) closer, “This House”, a bare and beautiful track that ties up the doubts that string lying throughout the album. While having a few less memorable songs toward the end of the album, Soft Sounds illustrates an ambitious young artist shooting for the moon in terms of mood and atmosphere, and passing the mark by a longshot.