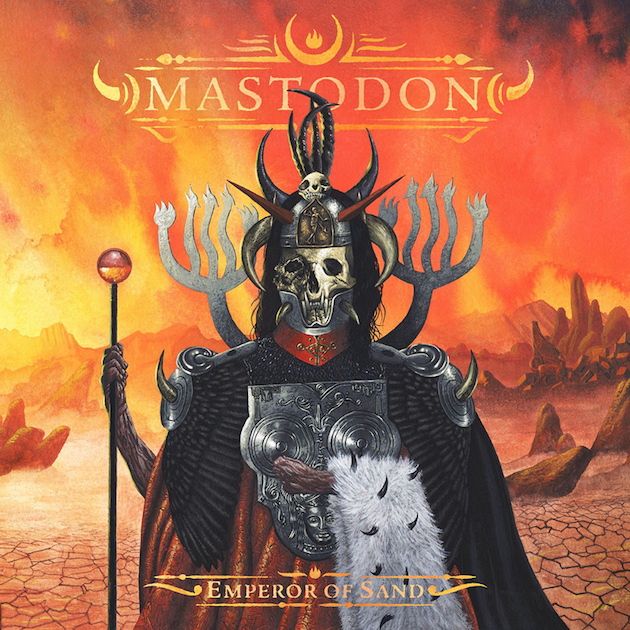 Mastodon deserves special commendation simply for sticking around as long as they have. Since 2002, the Atlanta rockers have been one of the most consistent acts in metal with no longer than three years lapsing between records. And each one has been satisfying- to different degrees, of course, but none of their albums could be classified as a true stinker. This is because of the titanic talent of guitarist Bill Kelliher, bassist Troy Sanders, drummer Brann Dailor, and guitarist Brent Hinds, who combine to form a sound that ventures into progressive territory, but never strays too far from their now-trademark solar system-sized riffs. The past two records in their catalog were departures for the band- they didn’t revolve around a story, choosing instead to write songs more traditionally.

Enter Emperor of Sand. Much like the one-two-three punch of Leviathan, Blood Mountain, and Crack the Skye, Emperor revolves around a central theme. Inspired by the various members’ run-ins with cancer throughout their lives, the story involves a man who is sent into the desert to contemplate his life before he dies. Emperor takes cues from their entire past, including their two non-concept works The Hunter and Once More ‘Round the Sun. Overall, the crushing riffs of Blood Mountain, Once More, and Crack the Skye dominate this musical landscape, pockmarked with Mastodon’s trademark potent heaviness, constantly-shifting time signatures, and Dailor’s fills flying overhead like jets.

Some songs throw the listener around like a doll in the hands of a toddler. “Roots Remain” starts with a hazy intro and quickly ascends into race-to-the-finish verse, while that descends into a slower chorus. The bridge leads into one of the more haunting moments on the album, with the swirl of a slide-guitar moving back and forth behind Brann’s funeral-parlor voice. It ends with Brent’s finest solo on the record.

Besides the instrumental wizardry taking place all around, Mastodon is known for having all four members contribute to the vocals, with all but Bill handling lead duties at different times on Emperor. For example, Brent’s higher-pitched yell is perfect for the verses in “Precious Stones”, a song which warns the listener “Don’t waste your time/If it’s the last thing you do”. Whereas, Brann’s more traditional clean delivery is perfect for “Show Yourself” and “Steambreather”. The latter track really showcases the album’s dark themes.“I wonder who I am/” sings Brann, “Reflections offer nothing/I wonder where I stand/I’m afraid of myself”. One of the strongest parts of Emperor is that the obvious allusions to cancer are enough to provide background, but never take the listener out of the experience.

All this being said, there are a few moments that stand out for the wrong reasons. While the hazy, midnight-bazaar sequence in the middle of “Clandestiny” ultimately adds to the mystique of the story, it can be a bit jarring to hear that following the burly verses and chorus. Similarly, there is a much-disputed standout on the album. “Show Yourself” is, without doubt, the closest Mastodon has come to writing a pop song. Essentially, its catchiness and radio-friendliness have divided Mastodon fans into the camps of “love it” or “hate it with the power of a thousand suns”. Even Dailor was hesitant about including it, saying “I felt like it was too easy to like or something – which is stupid, but I want to avoid ‘easy.’” He’s right: the rest of the album is anything but “easy”, placing the track firmly into the sore-thumb type of stick-out.

To be sure, all four musicians are at the top of their game here. While none of the songs have the stick-in-your-head memorability of songs like Curl of the Burl, Oblivion, or Chimes At Midnight, the technique and song structure are both second-to-none. The closer, “Jaguar God”, is worthy of their back catalog, with a somber acoustic intro feeding quickly into a go-ahead riff sure to satisfy the most hesitant of headbangers. Veteran producer Brendan O’Brien also handled Crack the Skye, so he knows exactly how to highlight the correct instrument at the correct time. The bass grumbles perpetually in the back of the whole production as the guitars soar, while the vocals act more like other instruments in the overall mix, as is customary for the band.

Emperor of Sand hits hard in more ways than one. Mastodon has never been a band to pull punches, and none are pulled here. Their practices sense of push-and-pull dynamics, backed with an unrelenting desire to inspire mosh pits and willingness to venture into deep lyrical valleys, are present and accounted for here. It never reaches the heights of their former concept records, instead choosing to fit as much as possible into the mold of their two most recent records. It’s Crack the Skye by way of Once More ‘Round the Sun, but that’s not as much of a travesty as it may sound to the Mastodon faithful- not when “Jaguar God” by itself could dull any lingering doubt. This is vintage Mastodon, alright.