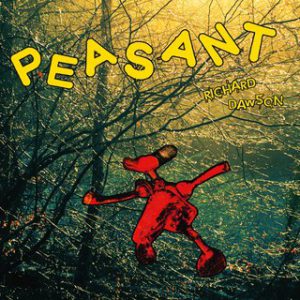 Beneath the seemingly-gimmicky, Renaissance-recalling textures of Richard Dawson’s new album, Peasant, lies some of the most interestingly composed, off-kilter folk of the past few years. Dawson proves to be a master of pacing and production alike on tracks like “Soldier”, as melodies and guitar lines continually transform at his will, and momentum oscillates from powerfully surging to wandering and warbling in a matter of seconds. Peasant is also chock full of one-of-a-kind narratives, with lyrics seeming to be pulled from diaries written a couple of centuries ago. The tracks’ vocabularies are all (very) rooted in the past, however the stories told within them prove very impactful to a listener not draped in dogskin after a trip to the bathhouse. Dawson croons and yearns from the views of the track’s title characters, leaving their emotions exposed beautifully song after song. Underneath the perfectly sloppy chords of Dawson’s guitar and intricate narratives lie bumps, harp arpeggios, claps, and a droning violins, making this wobbly, lo-fi folk journey feel even more personal and unique, as if these tales are sung to solely you each listen. From the loud, mob-like delivery of “Scientist” to the quieter, unsettling “Hob”, Peasant is a truly original experience, thematically and musically, all that an album is meant to be.

For Fans of: The Microphones, Avey Tare, Desertshore-era Nico