Album Review: The War on Drugs – A Deeper Understanding 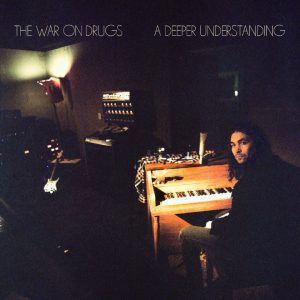 The War on Drugs – A Deeper Understanding

Alternative music is in a weird stage of its extended love affair with that holiest of all instruments; (to your Dad and his pals, at least,) the electric guitar. The last 10 or so years have seen a shift away from the post-punk revival sounds of bands like Interpol and The Strokes, and a revival of more synth and percussion-driven alternative music. The War On Drugs’ sound, as cultivated by Adam Granduciel, can best be described as these two styles distilled into one with heavy influences from earlier guitar bands. Synths and guitar work both feature heavily on The War On Drugs’ 4th album A Deeper Understanding though it’s a far cry from the bands I’ve mentioned above with their simple, economical, self-contained riffs. A Deeper Understanding is instead lush with ambient guitars that weave into a tapestry of sound evoking the works of great guitar and studio technicians like Jeff Beck. Though the similarities between the War On Drugs and their classic rock predecessors only extend so far as their studio mastery, this album’s sound is far moodier and more melancholic than a Jeff Beck record, often evocative of the industrial gloom and doom that served Bruce Springsteen so well in his early work, though it’s lacking that sense of melodrama that The Boss himself provided, and I would argue that’s kind of a good thing. Above all the War on Drugs are a unique band and A Deeper Understanding is a uniquely great album that may borrow from what has come before but never loses its own identity because of it, instead those borrowed elements enhance its own individuality, like the coolest guy at the party who showed up wearing a jacket bought at a thrift shop. This album is best enjoyed at twilight after a day that was frustratingly close to being good.