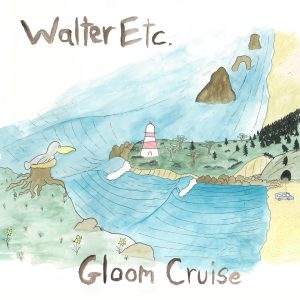 Formerly known as Walter Mitty and His Makeshift Orchestra, Walter Etc. come to the table with a fun little pop record full of catchy jams that anyone can enjoy. Produced by Jeff Rosenstock, the album is the band’s first full electric album, having been mostly acoustic on their previous albums. The band has a nice comfy sound accompanied by some goofy fun lyrics that come off as heartwarming. Some of my favorite songs on this release are “April 41st” (Track 4) where the singer laments having a weird childhood, and not being able to know if he’ll have a good day because of his weird birthday. The songs drift between these funny little tunes, to melancholy retrospective like on songs such as “Petunia You’re Home” (Track 6) which follows a girl full of potential, who because of indecision and struggles is just excited to be back home alone. The album ends on one of my favorite songs of the year with “Baby Blue Hammock” (Track 10) where the singer talks about the uncertainty of what the future holds, whether that’s success or failure. But in the end, it doesn’t matter as long as he’s able to be happy with the person he cares about. This album is a short catchy journey, which just lets us think about focusing on the little joys in our life, even if the big picture doesn’t pan out.