An Inside Look at Pitt’s Divestment Push 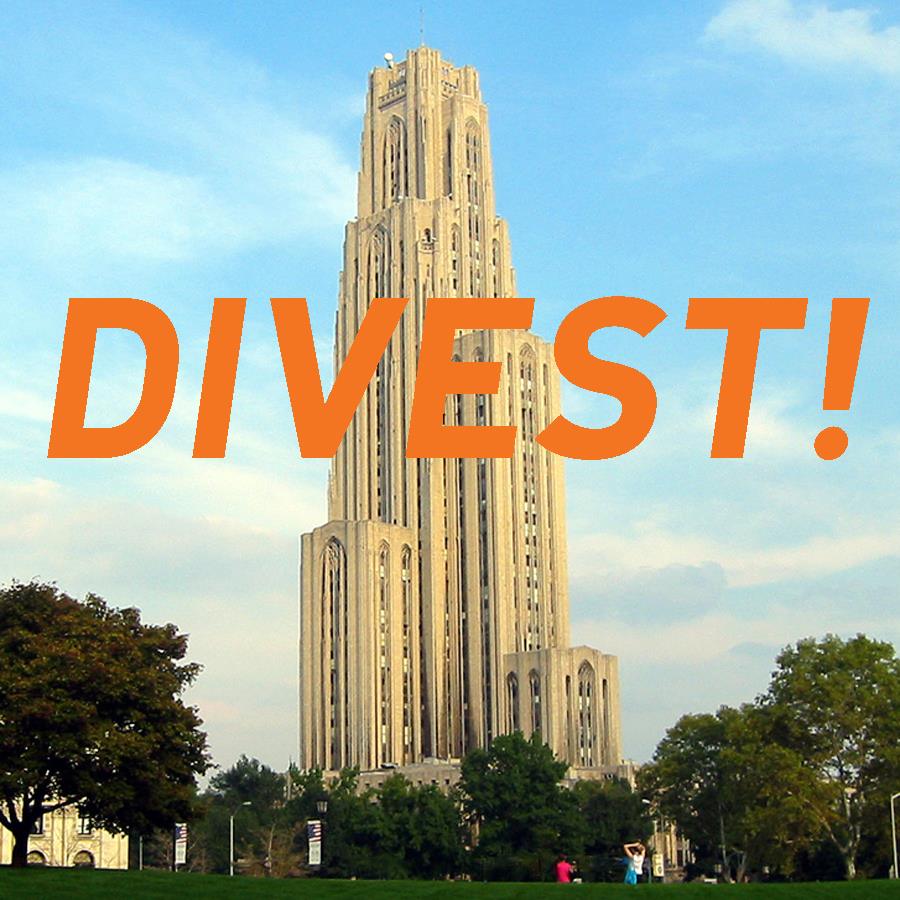 Organizations left and right talk about the dangers of climate change and warn us about its affects. Pitt is no exception.

A hot button topic on the debate stage, many argue about climate change’s existence, as well as man’s contribution to it.

However, conservative leaders, such as current nominee for president, Donald Trump, claim that these effects are a hoax, and that there are other reasons for claiming that climate change is real.

With opinions varying so drastically, climate change is an issue that elicits great emotion from both its believers and its deniers, and change can many times be met with great anger from either side.

However, that is not stopping some groups from stepping up and doing what they believe is right for the planet.

Fossil Free Pitt Coalition is one such group, hoping to be a champion against climate change on our campus.
The group is one of many similar organizations that support fossil fuel divestment, which is when a group pulls their investments from a certain holding.

Divestment is the opposite of investment, and is common among investors when they believe that their investment is beginning to go bad.

Those that support taking action against the fossil fuel industry believe that these investments are an indirect endorsement of the industry’s methods, and want groups to remove their investments, or divest, from the industry itself.

Because these divestment groups think that fossil fuel investments are perpetuating the issues that climate change creates, they believe it is incredibly important for public institutions and places of higher learning in particular to divest and take a stand against the fossil fuel industry.

However, they aren’t simply a few activists howling into the wind: divestment has gained a lot of popularity, and has become a more common policy as the issue has become more and more heated.

For example, both the state of California and the city of Copenhagen have decided to divest from the coal industry, with New York mayor Bill DeBlasio and Vermont governor Peter Shumlin asking for their city and state respectively to do the same, according to the Harvard Crimson.

Universities have also been responsive to divestment movements on their campus, hearing their arguments about the dangers of fossil fuel investments and understanding their place in the issue.

One of the largest was the divestment from fossil fuels by Stanford University, with Stanford News reporting that it would be taking investments from its 18.7-billion-dollar endowment out of the industry.

This feeling is rapidly spreading throughout the country and the world, and is starting to see light in our own corner of the globe.

The movement does have ties closer to our campus, with the Pittsburgh City Council working on a bill to extract investments in fossil fuels from their 660-million-dollar pension fund, according to the Pittsburgh Post-Gazette.

With so much activity revolving around the divestment movement, it could be thought to be a wonder why Pitt itself hasn’t seen similar movements.

That is what a group of students thought as well back in 2014, when they formed the Fossil Free Pitt Coalition, according to members Alyssa Martinec and Alexandra Stash, who are a sophomore and junior respectively.

Created as an offshoot of campus environmental advocacy club Free the Planet, Martinec and Stash explained that the group originally founded after a climate change protest march in New York known as the People’s Climate March brought the issue of divestment to the group’s attention.

The group saw many people who were very passionate about divestment, all from different backgrounds and of different interests.

“There were a bunch of different people represented there,” stated Stash.

By seeing so many different individuals and organizations talking about the importance of divestment, and the good it can do in many communities, the students left the march feeling empowered and anxious to take a stand themselves.

After they came back from the march, Free the Planet decided that it wanted to deal with the issue of fossil fuel investments, and bring the divestment movement to Oakland.

However, after learning more about what the project would entail, Free the Planet saw that it required its own association, one that was best structured to handle the issue of divestment, creating the Fossil Free Pitt Coalition.

Once the group started up and began working on the issue, it found that it needed a mission statement, a strong stance towards the issue that the university could hear loudly and clearly.
From that, they developed its demands for the Board of Trustees, which according to Martinec and Stash consist of four major parts.

From there, Martinec and Stash explained that the group would then move towards the university’s comingled holdings, which are holdings that are given to an investment firm to invest in whatever they saw fit.

This would take all investments from Pitt’s endowment out of the fossil fuel industry, but this is not the only goal of the group.

According to Martinec and Stash, the Fossil Free Pitt Coalition would then call for the creation of a committee made up of students, faculty, and alumni that would independently research investments that would both profit the university and are socially responsible and productive investments for the community.

This way, the university will not only divest from, in their opinion, harmful fossil fuels, but also provide a positive impact on the surrounding area.

These are some lofty goals, but their commitment to the issue and their sincere beliefs about how divestment can improve Pitt and the community have gotten the group to see a number of successes.

The Fossil Free Pitt Coalition has made a lot of ground, for example, in approaching their goals, becoming the first student organization to meet with the board of trustees.

According to Martinec and Stash, two members of the group met with the board on their last quarterly meeting to present their case as to why the university should divest from the industry.

After working with university administrators such as Vice Provost and Dean of Students Kenyon Bonner and Sustainability Director Erika Ninos, these students were able to have direct dialogue with the Board to air their grievances.

Martinec and Stash stated that they felt the meeting went well, mainly due to the quality of their information and wide range of issues they discussed regarding divestment.

“What really worked in our favor is that we did our research,” said Martinec.

The FFPC is now currently awaiting the Board’s decision, which should be announced at their next quarterly meeting in late October.

While the Board was more focused on the facts and specifics in regards to the investments, not everyone sees the issue that way.

Many find the dangers of climate change itself as enough motivation to deal with the problem, and work towards a greener campus.

The Fossil Free Pitt Coalition recognizes this, and, as a likeminded organization, wants to give everybody their chance to do what they can in combating what they believe to be a very pressing and important issue.

In order to give those people involved in other organizations their chance to help make a difference in regards to climate change, as well as to show the board student interest in divestment, the Fossil Free Pitt Coalition has 32 partners, each representing a different student organization on campus.

Martinec and Stash consider this one of the group’s largest achievements, because it showcases the diverse interest in the issue, especially among the student community.

“A lot of different students are concerned about this issue,” stated Stash.

The Fossil Free Pitt Coalition moves beyond Pitt’s student organizations as well, creating communication and cooperation with other climate change oriented organizations in order to have an effective and strong impact on the issue as well as a diverse one.

For example, the group has worked with other organizations interested in divestment by holding a rally in Schenley Plaza in the spring of 2015. Held on the National Day of Divestment, the group’s rally was used as an open dialogue session to talk about divestment and the issues revolving around it.

“It created an open space to talk about the issue,” explained Stash.

The purpose, as explained by the two, was to help explore the connection separate issues have together, and how they can be tackled together.

“We all need to show solidarity for one another,” said Stash.

All the time and energy spent on the issue can be great, with many different people coming together and gaining new experiences by working with the organization.

But Martinec and Stash make it clear that the goal cannot be forgotten in the midst of all the activity and excitement.

It is incredibly important, in their minds, to remember the issue of divestment, and why it needs to be dealt with.

The first major reason why divestment has such an important impact according to Martinec and Stash is one about the university, and the students and alumni’s place inside of it.

With the university taking endowment money and investing it in fossil fuels, the Fossil Free Pitt Coalition argues that the people who give the money should have their voices heard about where it should go.

And because the university doesn’t release the full information on the endowment’s whereabouts once invested, they believe it is important for that information to be more transparent.

“This is our money we give to Pitt,” elaborated Stash. “We have a right to know [where it goes].”
On top of this, the group also believes that investment in fossil fuels hurts the reputation of Pitt as a university.

According to Martinec and Stash, by investing in fossil fuels, the university is seemingly supporting fossil fuels, and in their eyes ignoring the evidence for climate change that the science community heavily supports.

Because of this, Pitt isn’t fulfilling its mission to support its students and their futures, as climate change, according to the group, threatens their livelihoods as a generation.

“The university is supposed to be a place of higher learning that supports its students’ futures,” said Martinec.

The group also believes divestment is important because of where the future of the fossil fuel industry is going.

With the issue of climate change becoming dealt with many times in policy, such as the Paris Agreements made in December of last year, Martinec and Stash explain that fossil fuel investments are becoming economically damaging.

Because of this, it is bad policy, in their eyes, for the university to continue to invest in fossil fuels, especially if the investments are losing Pitt money.

This, alongside the other issues, are what make divestment so important in the group’s eyes.
With it affecting Pitt’s reputation, economic sustainability, and its commitment to its students, the group believes that the university must embrace divestment in order to take a stand against the issues facing its students’ futures and help the community around it.

All of this in mind, the group looks forward in regards to divestment, hoping the university accepts their proposal at the next Board of Trustees meeting.

Because of this, the Fossil Free Pitt Coalition, climate change protest advocates and deniers alike all await the board’s decision, to see if Pitt will become another member of the organizations saying no to the fossil fuel industry.

WPTS has reached out to the Board of Trustees and has not yet received a response.