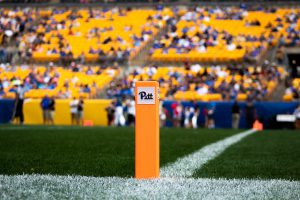 Pitt has now emerged out of three straight nail biters with three huge wins that improves them to 4-2 on the season and puts them in the driver’s seat to potentially have an incredibly impressive season. This is one of the few times in a long time that I have felt truly excited and look towards the future in a really good way. The Panthers do not necessarily have a cakewalk to the finish line, but there could be a formula to make this their best season since the late 2000s.

Injuries and some odd plays nearly caused this team to falter as they beat Delaware 17-14 and a thunderous second half comeback by the Duke Blue Devils still did not crush the Panthers as they pulled out the win in Durham 33-30 over a rival conference foe. With a bye week this past week, Pitt should be well rested before heading up to Syracuse, but there are a few things that are obvious from the past two games, and thus, here are my five takeaways from Pitt’s last two weeks.

There Is A Correct Way To Use V’Lique Carter

Offensive coordinator Mark Whipple and this offense have tried to fit Carter into the backfield in unnatural ways when that is simply not what he is. They have tried to force him to be an in between the tackles runner, but Carter is much better when he is able to stretch the defense to the boundaries and more so as a gadget player. They finally saw the benefits of that in the second half of the Duke game, as Carter not only caught the game-winning touchdown, but easily had the most success running the football as he has had all season long. Carter’s speed and ability to catch the ball out of the backfield are skills he has, but you have to use him in the right way, which means a lot of sweeps and outside zone. Meanwhile, in the passing game, he should be running wheel routes, streaks, and angle routes. Carter can be lethal going forward as long as they use him in the correct way. He showed how dynamic he was with that spin move on the last minute touchdown.

He’s a gadget player, now they need to use him like he is just that.

Yeah, I have zero clue as to why Jacques-Louis has been completely forgotten about in this offense. Every time he gets his hand on the football he rips off a sizeable chunk. It’s not just his speed that makes him electric on jet sweeps, but he has natural receiving chops as well. We saw that at the end of the Duke when he ripped off a huge gain on the second to last drive of the game for Pitt. He makes plays and Whipple is starting to realize that. Get the ball in his hands and it can take a lot of the pressure off of Maurice Ffrench and Taysir Mack. 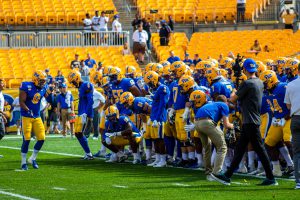 This Team Is Full Of Survivors

There have been so many close games this year and many times when it seems like this team was out of it, they fight back every single time. The team gave it their all in Happy Valley, they gutted out an ugly win over Delaware, battled back from 31 and 27 unanswered points in the UCF and Duke games respectively, and now have a 4-2 record to show because of how they have gutted out these wins. That says something about Pat Narduzzi as a coach. For all the problems this team has had, this team does not get rattled and they battle back like it’s nothing. That is perhaps the biggest development of the season. The team has bought into Narduzzi’s vision and they are playing like it.

The Penalties Must Be Cleaned Up

With 15 penalties for 145 penalties against Duke and 13 penalties for 115 yards against Delaware, it is quite honestly unacceptable and it is one of the main reasons why these games were close. Sure, there were some ticky-tacky penalties called, but that does not mean all of them were bad. This team has to be more disciplined and avoid these penalties since it is gifting these teams whole drives and points. This has to be the point of emphasis leading up to the Syracuse game next Friday, because sooner or later it could cost this team a game.

Paris Ford Is On Another Level

Pitt has an absolute gamer in Paris Ford, there is no doubt about that. Ford’s two interceptions in the Duke game were indicative of the impact that he has on this secondary. They will miss him dearly for the first half of the Syracuse game (due to his targeting penalty vs Duke) because of his playmaking ability and passion out on that field. Ford is an NFL talent in this secondary and could be one of the better talents to come out of Pitt recently should he keep this up.

Syracuse will not be an easy out in the Carrier Dome. They never are. This team is not as good as previous Syracuse teams, but any team that is coached by Dino Babers is a dangerous team, that is for sure. The defense is among the worst in the NCAA, but the offense has proven to have some dynamic playmakers on it in Trishton Jackson and Moe Neal, although this past Friday night might not have shown that. The Panthers cannot take this game lightly, even though on paper they are the better team. But if they can play a clean game and tighten down they should win, they just can’t sleepwalk into it.