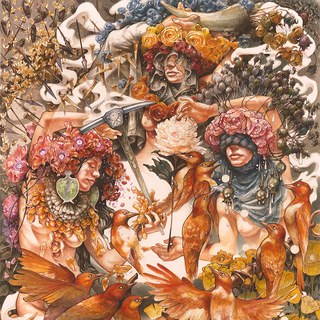 Gold & Grey marks the final piece in Baroness’ chromatically-themed albums, and it’s a stunning conclusion. Hailing from Savannah, Georgia, Baroness has been making quite a name for themselves, with each release elevating the band further still. The band has its roots in metal, originally playing progressive sludge on their debut EPs and on Red Album and Blue Record. While touring in the UK in 2012, their tour bus crashed, leading to injuries that resulted in line-up changes. With the release of Yellow & Green following this event, the band shifted toward a mellower, progressive rock sound. Purple followed in 2015, expanding on this rock sound but with a bit more edge and drive. Now, with Gold & Grey, the band combines elements from its previous work to bring the chromatically-themed albums to a proper close.

Gold & Grey is structured so that the album starts things off with high-energy songs, slows down for some mellow tracks in the middle, and then brings the energy back for some of the closing songs. Many of the more energetic songs, such as “Front Toward Enemy,” “Seasons,” and “Borderlines” are reminiscent of Purple, complete with John Dyer Baizley’s yelled vocals and anthemic guitar riffs. The rhythm section is phenomenal for these songs, with many stand-out bass lines and unique drum patterns. While maintaining some of the elements of Purple, the songs do find a unique feel that makes them stand out from past records but still retain the core sound that Baroness is known for. They are progressive in nature, featuring ever-changing dynamics within the generally high-energy songs, as well as some unique experimentation with song structure such as at the end of “Seasons.”

While these progressive tendencies can be seen in the faster-pace songs, they really shine in the middle of the album in tracks such as “Cold-Blooded Angels” and “Emmett: Radiating Light,” which feature soft vocals over calming guitar and piano. These songs feel like what Yellow & Green was trying to do with its softer tone, but executed with more maturity and deliberateness. They add a new emotional side to Baroness that we haven’t quite seen executed to its fullest potential before, and they also help give the album a more complete feeling. I really enjoyed the middle section of the album, and I hope that Baroness keeps some of these elements in future releases.

While I do love this album, it does have some shortcomings. Much like Purple, the mixing sounds very compressed, especially the drums. Unfortunately this muddies the whole mix, and I think that with cleaner production this album would sound a lot better. Also included between many of the tracks are instrumental interludes. While I enjoy all of these, I feel that there are too many interludes on the album so that they end up taking away from the flow rather than adding to it, especially towards the end of the album.

Overall, I think Baroness has created something really special with Gold & Grey. The album is dynamic, progressive, and captures many of the band’s best qualities. It is the perfect resolution to an already fantastic set of albums.