“Be the Cowboy” by Mitski – Review 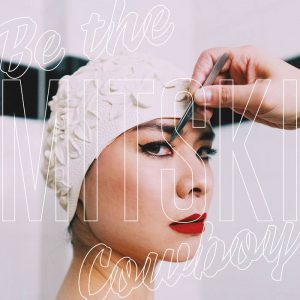 I have a lot of thoughts on Mitski. The first time I saw her play live was in Austin, Texas at the Mohawk. Elvis Depressedly and Gabby’s World (FKA Eskimeaux) were opening. I went with my friend who was in college at the time, and only back for the summer. I was 15 almost 16. I’m 19 years old now. I like to think about how much I have changed during that time, I moved and changed schools 3 times, moved again, and began college. I, however, still gravitate towards Mitski’s music, like a moth to a flame.

I think about this a lot due to the fact that we’re both outsiders as people who moved, though her moves were significantly more dramatic than mine. Mitski moved to a new school in a new country every year K-12. When you move a lot in a short period of time you begin to feel like an outsider in a lot of ways. Mitski helped me feel less alone during this period. This is also due to a lot of her music having themes of both anxiety and depression, something I’ve suffered from for a very long time.

The other thing to consider is all her albums (that came out post-college for her) have come out during pivotal times during my life. Puberty 2 came out when I was a junior in High School having recently moved to Westchester County, New York; Bury Me at Makeout Creek came out when I was 15, living in Austin, Texas during the transitional period between moving schools. Be The Cowboy has come out at another pivotal time in my life, moving out of my parents house into a house here in Pittsburgh. This is my first time having to be totally responsible for myself and keep myself alive. It’s an album that I would say combines a lot of her music from before she played guitar and Bury Me at Makeout Creek/Puberty 2 to create a cohesive sound. This is definitely her most diverse album to date. There’s no defining sound but it still flows beautifully, like her earlier work, but with more complex instrumentation.

It feels like this album is all Mitski – no one is making her stick to a theme, it’s just her.

“Geyser,” the first single that begins the album, is a song that reminds me a lot of Mitski’s earlier work, which is all on pianos and is some of the most beautiful music in existence. What I really like about this song is that it combines her older compositions with her most recent work; it features a long piano build that leads to a very interesting, complex guitar melody.

The second track, “Why Didn’t You Stop Me?” is extremely synthy; I love it. It really marks a new direction for her, because it doesn’t sound like any of her previous music (due to the synth), but it still feels like a Mitski song. This song is so sad too; from my understanding, it’s about seeing someone in a new light. “Old Friend” is such a great song, and I love this song so much. This song is about trying to see an old friend and how difficult it is to coordinate seeing them.

Remember about 2 years ago when both Kesha and (Sandy) Alex G released a country album? That’s how I feel about the song “Lonesome Love”: no one asked for Mitski to write a folk song, but here we are. I feel like it’s one of the songs that embodies Be the Cowboy. The song is kind of folk, and the vocalization on this track is different from a lot of her other work. It’s a solid song though, even if it is different. It also has the lyric “no one f*cks me up like I do,” which in my opinion is a clever and funny lyric.

“A Pearl” is another song I love. The lyrics to this song are clever; it’s a song about wanting to be alone. The guitars on this song are also one of the heavier on this album, but in that orchestral way that Mitski is known for. The vocals on the track are also closer to her music pre-guitar.

“Remember My Name” is a pop song; well, it’s not, but the chorus is very catchy and it ends in these distinct guitars. “Me and My Husband” is what happens when Mitski gets a full band and absolute power – it’s a perfect song. This song is probably about music, not a husband in particular. “Come into the Water” is a slower song and it weirdly reminds me of Lana Del Rey, but it’s way more complex and I genuinely like it, despite not originally loving the track. “Washing Machine Heart” is a synth love pop song, well kind of with a strange melody that really works. “Blue Light” is a light melody that’s very serene.

“Nobody” is such a good song, even people who don’t generally like Mitski like this song. It’s a pop song about loneliness and longing. I’m pretty sure she made it when she was depressed, but I seriously relate to this song. Like when you’re depressed you generally don’t want to date but you want to be near people and have “a good honest kiss” so you don’t feel as alone. This song embodies that feeling. To me, “Nobody” is the song of the summer.

“Pink in the Night” is another song with synths. It’s a love song and it features one of my favorite lyrics of the album “I could stare at your back all day,” due it’s relatability. “A Horse Named Cold Air” is classical Mitski, and honestly I love it. It’s unexpected because of its interesting chord progression that she makes sound so beautiful. From a music theory perspective what she does on this track is so cool.

“Two Slow Dancers” is a classic Mitski final track, AKA usually my favorite song on any Mitski album, because it’s usually the saddest. On this album, however, I don’t think it is. It may have the slowest melody, and I think it’s definitely sadder songs on this album. It’s a good closer for sure and really ties up the album.

The sounds on this album are so quirky, but this is also basically a pop album. Mitski music has always blurred the lines between genres, but in this album I really felt like she went all in. It feels like this album is all Mitski – no one is making her stick to a theme, it’s just her. On top of all of that, the album repeats the word “nobody” multiple times, to stick to a theme of being alone and a lonesome cowboy. This is what makes it one of the most interesting and amazing albums of the year. I can already tell this is going to have a lot emotional weight for me in the coming years.