Best of the NHL Qualifying Round 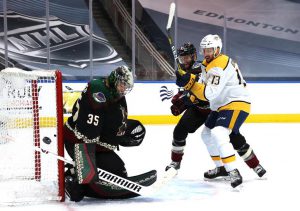 2020 feels like the wild wild west nowadays, and hockey is no exception.  The NHL made plans for a play-in tournament this season, with the teams ranking five through twelve in each conference going at it in best of five series.  Twelve seeds took it to five seeds as upsets abound filled the league.  There were crazy comebacks within the span of 24 hours.  Hat tricks across the board showered the league with goals.  Tomorrow, the NHL will officially begin the playoffs.  Now, we’ll look back at the best of the qualifying round.

With Chicago being the youngest team in the qualifying round, it is only fitting that a Calder nominee be the one to have such a great performance.  Kubalík scored two goals and registered three dimes in Chicago’s first win over the Edmonton Oilers.  Kubalík would play an instrumental role all series, scoring the series winning goal off a pass from Jonathan Toews.

During this situation, the Islanders happened to be on a power play at the start of the second period.  The Isles led 2-1 at this point in the game, making this play critical.  A one-timer is stopped by Sergei Bobrovsky; however, a rebound is let out right in front of the crease.  Islanders forward Anders Lee takes the rebound but Bobrovsky stretches out and makes the save with his left pad.  Once again, there is a rebound, this time ending up near the faceoff dot.  Mat Barzal shot this rebound up high but Bobrovsky, pushing off of his right skate, goes into a windmill-pad stack save to keep the Panther’s deficit at one goal.

Pierre-Luc Dubois played sensationally throughout the qualifying round for the Blue Jackets, and game three against the Leafs was no exception.  Dubois posted a total of four points in the series but was buzzing constantly.  Dubois scored a sharp angle goal early in the second period to start the Blue Jackets comeback effort.  Dubois would then score the game-tying goal on a two-on-one before burying the game winner.  Dubois’s game winner came as he received a pass from Alexandre Texier, which sprung Dubois on a breakaway.  Morgan Rielly couldn’t catch up to Dubois.  The Columbus forward buried the shot on his backhand over Frederik Andersen’s glove hand.  The goal gave the Blue Jackets a 2-1 series advantage. 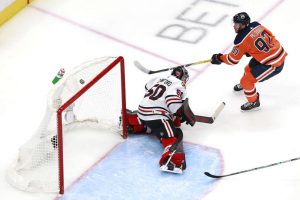 Connor McDavid easily scored at will in this series against the Chicago Blackhawks.  A power play snipe short side on Chicago goalie Corey Crawford opened the series scoring.  McDavid is leaps and bounds the quickest player in the league, which he showed off on his second goal of his hat trick, as he burned Olli Määttä.  Before this goal, McDavid scored a goal by batting it as it was bouncing on the ice to open the scoring.  These two goals came within the first five minutes of game two.  Watch the whole hat trick here.  McDavid also assisted on the opening goal in game four, dishing a pass to Josh Archibald who buried the feed, only 45 seconds into the game.  McDavid came to play, but I can’t say the same about the rest of his team. 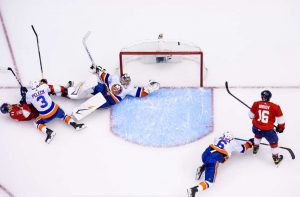 Ryan Pulock had the opportunity to shut down the Florida Panther’s best forwards.  He did just that.  The three leading scorers in the playoffs for the Panthers were: Mike Hoffman, Aleksander Barkov, and Jonathan Huberdeau.  The trio combined for a total of 12 points, however, only four of those points were scored at even strength.  Pulock’s most notable play came in game four, when he dove for the stick of Aleksander Barkov with his own stick, saving a for sure goal.  Pulock also unleashed a bomb of a one timer to score in game two.

Not much to say here.  If Darcy Kuemper is not in the net for the Yotes, they would not have made it into the Stanley Cup Playoffs.  Earlier in the year, Kuemper was a frontrunner for the Vezina Trophy before he was injured.  Kuemper is an elite talent in net.

The night before, the Leafs blew a 3-0 lead, as Pierre-Luc Dubois scored a hat trick to secure the win and a 2-1 series lead for the Blue Jackets.  Not even 24 hours later, the two teams were back on the ice at Scotiabank Arena in Toronto.  That Friday, six elimination games were being played, and up until this game, all the teams that could have advanced did just so.

The Leafs came out sluggish, allowing a goal to noted Leafs killer Cam Atkinson just four minutes into the game.  Allowing goals early and often has been a killer for the Leafs all season.  The rest of the first period went on scoreless.

Starting the second period, the Leafs gave up another goal to the Blue Jackets, this time to Vladislav Gavrikov who pulled out his signature “call me” celebration.  Veteran Jason Spezza, who was brought in this season by Leafs GM Kyle Dubas, had had enough.  Spezza, the Toronto native, dropped the gloves and took a beating at the hands of Dean Kukan.  After the game, Leafs head coach Sheldon Keefe had this to say on Spezza’s fight, “Jason Spezza did not want our season to end today… That’s a guy not going down literally without a fight”.  Freddie Andersen and Elvis Merzļikins traded saves and the second period came to an end with Columbus up 2-0. 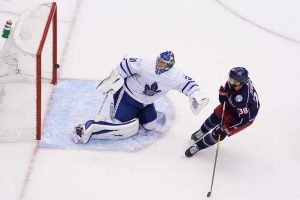 Boone Jenner puts the Blue Jackets up 3-0 with 5:42 to go in the third period. (Photo by Andre Ringuette/Freestyle Photo/Getty Images)

Toronto, still uninspired, even with Spezza’s fight, played without a bite for the first 13 minutes of the third period.  With Columbus playing a tight neutral zone, Morgan Rielly tried stickhandling around Blue Jackets captain Nick Foligno, only to have the puck stripped off his stick.  With the turnover, Foligno got it to Boone Jenner who buried it on the partial breakaway with 5:42 to go.  With Toronto’s season on the line Sheldon Keefe pulled Andersen for the extra attacker with about four minutes to play. 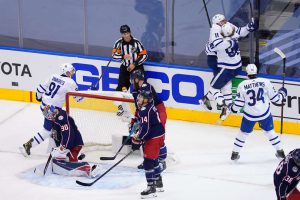 Zach Hyman (#11) and William Nylander (#88) jump into the boards together as the Leafs tie the game. (Photo by Andre Ringuette/Freestyle Photo/Getty Images)

William Nylander, vacating the front of Columbus’s net, got Toronto on the board with 3:57 to go.  51 seconds later, Leafs’ captain John Tavares scored a shot high blocker side from the slot to make it a one-goal game.  With the Leafs goalie pulled with about a minute and a half to go, Pierre-Luc Dubois missed an empty netter.  With the Leafs struggling to get into the zone, they made it.  Once in, Auston Matthews zinged a passed to Zach Hyman who buried the game-tying goal. 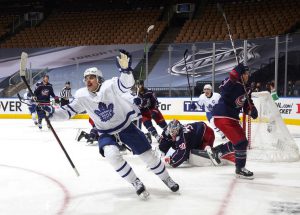 Auston Matthews celebrates as he scores the game-winning goal. (Photo by Mark Blinch/NHLI via Getty Images)

On to overtime.  The Jackets and Leafs both exchanged chances before Morgan Rielly was tripped by Nick Foligno.  With a draw in their defensive zone, the Blue Jackets had to win the faceoff.  They did.  David Savard couldn’t clear the puck, and Morgan Rielly kept it in the offensive zone for the Leafs.  Rielly shoveled the puck down to Mitch Marner, who found John Tavares, who gave a pass across the seam to Auston Matthews.  Matthews stuffed the shot top shelf.  Game.

Per NHL PR, the Leafs are the first team in NHL history to overcome a three-goal deficit the game after they surrendered a three-goal lead.  The Leafs also became the second team in playoff history (2017 Ducks) to score three goals with the goalie pulled.