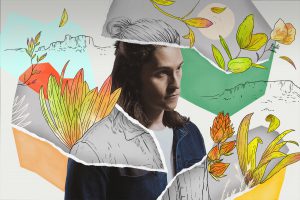 Ben:
This weekend, I had the opportunity to talk to DJ/Producer Big Wild. For the unfamiliar, Big Wild is a DJ that first entered the scene with a series of singles and remixes over the past few years. In 2017, he released his EP, Invincible, which is featured on his current U.S.

How would you describe your music to someone that’s never heard it before?

I’d say it’s like electronic hip hop. Kind of Experimental, but that’s a little vague for sure, it’s very eclectic. Everyone has a phone these days, so I just tell them to check me out on Spotify.

I do like being able to go to new places and I do love performing and meeting new people at the shows. That’s definitely the best part. It can be tough though being away from my studio where I make a lot of music. It’s hard to make music on the road. I’m away from my friends back home. It’s a give and take but I definitely like being on the road. It’s a great experience.

Who are you listening to right now for musical influence?

I haven’t been listening to too much new music. I’ve gotten into a bit of a rut in finding new stuff. I’ve been playing a lot of the two dudes I’m on tour with; Daktyl and Deadcliffs. I’m always listening to some similar artists like Tame Impala; they’re staples for me.

You’re tour manager mentioned that you’ll be headlining Red Rocks this summer. Do you want to talk about that for a bit?

I’m doing a co-headline with louis the child on May 24th. Red Rocks is amazing. We’re definitely planning a lot of really special things for that show. It’s one of those venues that if you’re headlining you have to do something special for. It’s so pretty, and there’s 10,000 people, its outside in a national amphitheater. You’ve got to do something special for the fans there. It wouldn’t be doing the venue justice.

What are you going to do to make it special?

I can’t say everything. But I’m bringing some guests for sure, I have a couple, I’ll say arrangement ideas that I have, and I’ll be doing and some special set pieces. That’s really all I can say at the moment.

Are there any artists that you particularly like to work with or collaborate with?

It’s tough to say because I haven’t actually collaborated with too many people. I really enjoyed working with Ida Hawk on invincible on the latest EP. I think that’ll be a question for the future when I have more collaborations under my belt.

Big Wild will be performing in Pittsburgh at the Rex Theater on February 22nd.

Check out his music here…

or by clicking here…