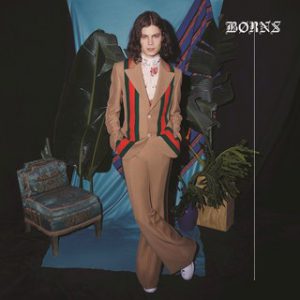 “Blue Madonna” is the second full-length release by American singer-songwriter Garret Borns (stage name Børns) and features a fusion of synth-pop and indie rock styles. The album opens with “God Save Our Young Blood,” featuring Lana Del Rey, whose presence on the track is not too noticeable since she sings backing vocals for most of the song. The song’s verses are somewhat lackluster, but the chorus features glimmering synths and upbeat, memorable vocals that help to carry the song. The second track, “Faded Heart,” is one of the best examples of Børn’s ability to blend synth-pop and indie rock. The bass line keeps an upbeat and groovy tone throughout the song, and the higher vocals make for a catchy chorus. Borns’ shows his ability to create more subdued music through the dreamy, synth-saturated choruses of the album’s third track, “Sweet Dreams”. The seventh song, “Second Night of Summer,” experiments with a chorus of heavy synthesizers that move in and out of the track between the vocals. I like the direction Børns takes with this track, and I wish that there was some more of this type experimentation on the album. “Supernatural” is the tenth track and has a nostalgic sound to it with its reverb-heavy vocals and good use of background textures, such as a crowd cheering in the background during parts of the choruses. The closing song, “Bye-Bye Darling,” sees the use of more non-electric instrumentation. It is carried mostly by piano and acoustic guitar, but retains the synth background that helps to pull the album together.

Overall, I feel that the album has a lot of really great ideas and concepts, but I feel that the album lacks somewhat in direction as well as experimentation. Aside from a couple tracks on the album (ones that I have described above), the songs seem bare and lack the “final punch” needed to really impact the listener. Børns also displays great vocal ability on the album, but much of the intimacy of his singing is often lost due to the over-saturation reverb put on his voice. I like the direction taken here, and I think that Børns is showing signs that he may put out something big for his next release. However, as is, the album falls short in many areas which keep it from being a release that demands repeated start-to-finish listens.