“The Bluest Star” by free cake for every creature – Review 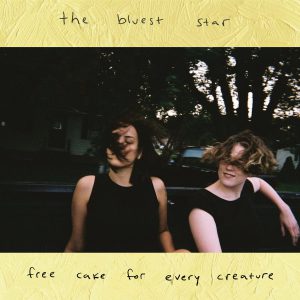 I love Twee Pop. I’m not kidding. I have 3 different Twee Pop playlists on Spotify. It’s in my twitter bio even. IMO free cake for every creature is a modern embodiment of what the Twee Pop movement stood for and I have been elated for this album since its announcement earlier this summer. The Bluest Star is a beautiful and personal album about changing, and accordingly this is probably free cake for every creature’s most distinct album. I feel like Katie Bennett really tried to step out of her comfort zone with The Bluest Star by including a wider range of instruments; a steel pedal guitar is heavily used on this album as well as a drum machine. She may have changed her sound ever so slightly by adding a pedal steel guitar, the lyrics on this album are just as poignant as they were on any of her previous work.

Track by Track:
Riding into the Sunset in a Busted Car: The first track on the album, yes there is pedal steel guitar to mark the start of a new album. Lyrics are so warm on this track.
Around You: This was the first single. It’s a really solid pop song, almost perfect. It’s essentially a love song about just wanting to hang out with one specific person. The chorus is super catchy, “I just want to hang around you”.
Whole World Girl: This is a really good song. My only critique is I wish that the vocals were a little louder. One of my favorites on the album.
Shake it Out: A simple song. It’s slow but conveys its message perfectly with the simplicity of the drum machine. It’s a song about trying to get through something difficult and just having faith that you can Shake it Out.
Took a Walk: A synthy song, I would not categorize it as Twee. It’s an interesting, and simple to convey the simplicity of what a walk does for you.
Sideline Skyline: Another song strongly featuring the steel pedal guitar, which makes me almost wanna categorize this album as country. I love the lyrics on this track. “I’m nobody’s mother, thus I don’t need to hold it all together”
Sunday Afternoon: A surprisingly complex song instrumentally, considering it only has one lyric “happily”.
In Your Car: 2nd single released. A bop. A song about Summertime. Catchy as heck. “Radio picking up the distant city’s station”
Tom or Mike or Pat Or: A classic free cake song, very repetitive, but good. Features the lyric “And a bug bite on my ass”
Hometown Hero: I love this track. It uses that 80s synth I really like as well as the steel pedal guitar. Really a great track
Christina World: Just guitar, vocals and steel pedal guitar. This song is sweet.
Goodbye Silently: This is a song about growing up and saying goodbye. Yes, it’s a cliche, but it’s also a beautiful song. It’s super poetic and has this grainy sound that reminds me of moving songs.
Be Home Soon: The final single. This song has such nice lyrics. It’s a very descriptive song about riding the subway. I really enjoy it. Probably my favorite of the singles.
Night Music: This song begins with a voice mail from what I’m assuming is a family member. It ends with sounds of what I’m assuming is the streets of Philly.

Overall this is an album that is mostly “perfect pop songs.” Nothing super experimental or strange, but super enjoyable overall. Katie Bennett may be tired of her dull routine past her early 20’s but she still knows how to write a good song. I would give this album a higher review, but there were a few songs that I thought were not as strong and because of those I give this album an 8.7/10.