Review by Sam Taylor
This review was brought to you by… 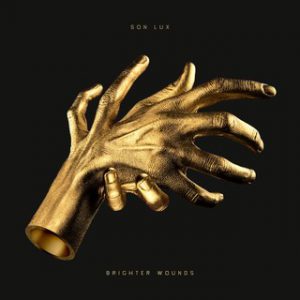 Son Lux is making better art than ever before: Brighter Wounds is inspired, and Son Lux holds nothing back. This is their fifth album and even still, nothing comes close to their sound. Ryan Lott’s voice is chilling, haunting, and moving, with a vibrato that just breaks me down. The drums are so technical and driving, even underneath the awestriking moments created in the rest of the soundscape. Just as much as in prior albums, Son Lux draws from a huge number of instruments, and uses each sound deliberately: heavenly choirs, energized shouts, lofty high strings, and furious low reeds add color to every song that they touch. Son Lux also sneaks in some motifs that reference prior albums, which as a longtime fan, I adore. Even Son Lux’s lyric writing has improved substantially, with some hard-hitting introspective questions like, “how do we feel in that photograph and how do we feel it again?” in “Dream State.” Perhaps most interestingly, the meaning of the album doesn’t feel confined to a single story. Rather, the meaning seems to come from the slow, powerful, accumulation of different instances of regret or doubtful hopes for the future. This buildup is released in the epic closer “Resurrection,” which gives me chills every single time.

My one complaint about this album is that it sounds compressed. (For those who don’t know, compression is when a song is adjusted to collectively sound louder, because psychological studies show that people generally prefer louder music. The problem, of course, is that if the whole song is louder, the dynamic contrast in a song is reduced). There’s very little in this album that I don’t like, but there are many components that I could like so much more, and the only thing standing in their way is removing the compression, which wasn’t there for any of Son Lux’s prior releases anyway. It’s frustrating, and even distracting to listen to. Even before the chills from the impact of “Resurrection” leave my body, I can’t help but think “it could have been louder.” The shouts for “Dream State” are underwhelming. The intros to “Labor” and “Surrounded” should have started way more quietly, but instead they’re jarring. It’s such a good album, even with the compression, but it could have been so much better without. I’ve never been so disappointed by an album that I’ve enjoyed so much.

You can tune in to hear Sam host Square 1 on WPTS Radio from 8 AM to 10 AM on Saturdays. This review was edited by Julia Coakley of the WPTS Editorial Board.