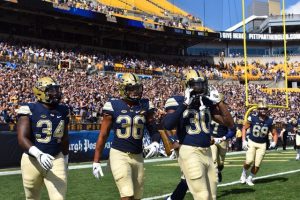 After clinching the ACC Coastal with their fourth consecutive win last week, nothing looked out of reach for the Pittsburgh Panthers, who entered the afternoon ranked for the first time since 2016.

Defense was the name of the game early. The teams traded quick drives before the scoring began. Back to back 15-yard penalties by the Panthers gave way to a 47-yard run by Miami running back Travis Homer. The Canes’ drive stalled in the red zone, ending with a 37-yard field goal by Bubba Baxa.

A pair of punts, a fumble by Darrin Hall, and a few more punts from both sides made things clear: the offenses weren’t going to do much scoring. With just over 9 minutes to play in the first half, Kirk Christodoulou looked to send the ball back to the Canes when disaster struck. Miami returner DeeJay Dallas made four Panthers miss, taking the punt 65 yards en route to the first touchdown of the day. The half ended with Miami on top 10-0.

In the second, things went from bad to worse for Pitt. Three penalties on the opening drive ruined any chance for momentum. After two more punts apiece, the Panthers finally put a scoring drive together. Alex Kessman nailed a 40-yard field goal, cutting the Canes lead to 10-3.

It took just 38 seconds for Miami to respond. Two plays after the Kessman kick, Homer took a 64-yard run to the house. The Canes defense, ranked fourth in the nation, kept Kenny Pickett in check all afternoon. Three drives later, Dallas tacked on to the lead with another score.

As the clock ticked down, the Hurricanes took the win 24-3. Pitt looks to bounce back next week in the ACC Championship against #2 Clemson.