City Pop by Benny Sings Has Me Singing Along – Review 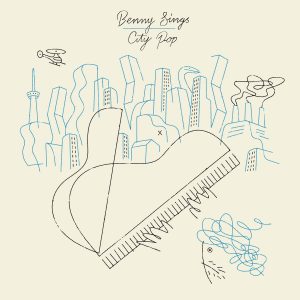 City Pop by Benny Sings is a cute, fun album. I didn’t catch some grand artistic venture, but that also didn’t seem to be the point. I enjoyed listening to it very much.

To dig a little deeper, Benny Sings maintains a smooth, easy voice overtop funk beats produced in familiar Indie timbres, featuring prominent synths, groovy basslines, and rigid bass drum pulses. I especially loved the molasses-speed ¾ funk jam “Everything I Know,” as well as the horns-filled single “Not Enough.” “Duplicate” grew on me as well, but these are just standouts among an album that collectively feels just as danceable and just as deeply in the pocket.

Unfortunately, Benny Sings’ vocal timbre seems to trap him in this chill realm, even when that’s not the best. This isn’t noticeable in most of his songs because most of his songs are chill. However, I’d describe “Nakemeguro” as sedated more than chill. I frequently missed the start of this song till I solely paid attention to it for the purposes of this review. A song can be chill, but there should be some substance there, and even though “Nakemeguro” has some interesting licks here and there, it just feels like it doesn’t want to be listened to closely. “My World” is another song that simply feels like it doesn’t want to be listened to, but instead of being a chill groove whose two-minute runtime ends before the listener can pay attention, it’s a full-blown ballad that is so relaxed that it just sinks into boringness.

This album was fun, but whether Benny Sings went lax with some of his songwriting or merely wrote too ambitiously for his performance style, some songs were ultimately disappointing. Granted, they only felt disappointing upon close inspection, and I’m convinced that City Pop isn’t really meant to be picked apart. It’s a funky little backdrop to cooking and driving and filling out mundane paperwork, so on and so forth. I sing along to the choruses of almost every other song that comes on, and I don’t really notice when I’m listening to a song that’s not as good as the others. But unfortunately, in reviewing it, I have to acknowledge that the below-average songs are still on the album.