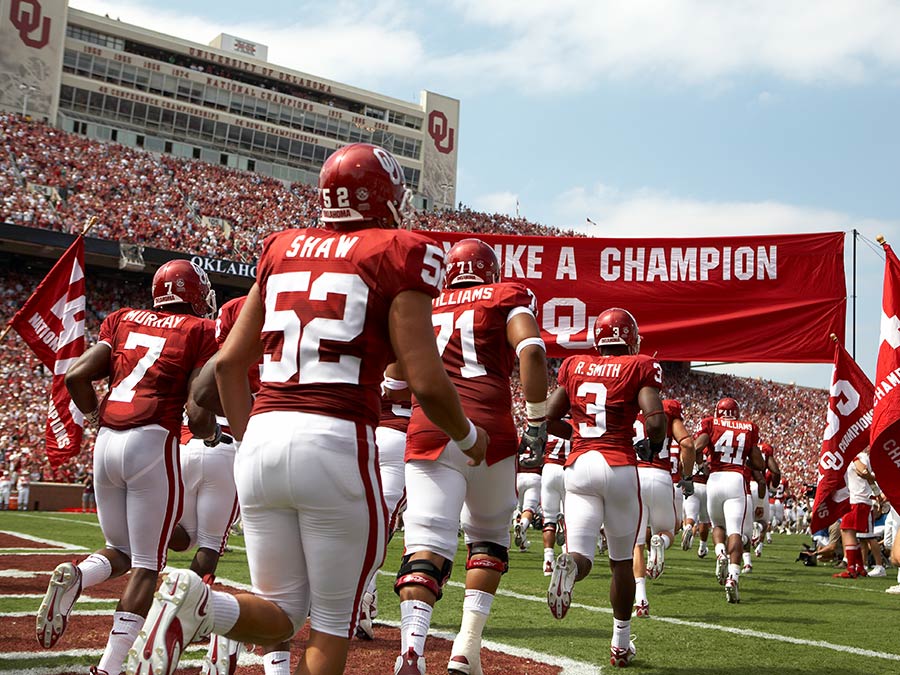 Well, twelve weeks of college football are now in the books for 2016, and the playoff picture is becoming a bit clearer. Louisville helped the committee out big time with their loss to unranked Houston on Thursday night, surely eliminating themselves from playoff contention. However, the highly anticipated matchup between Ohio State and Michigan on Saturday will have a major impact on what teams are able to crack the top four by the end of the year.

HOT:
Wisconsin (9-2, 6-2): The Badgers have been sitting just outside the top four for almost the entire season, and with Louisville’s loss they now have a path into the College Football Playoff. With a win this weekend against Minnesota, Wisconsin would advance to the Big Ten Championship game to play either Ohio State, Michigan, or Penn State since the Big Ten East is quite the mess right now. The Badgers also have this in their favor: If Ohio State defeats Michigan and Penn State beats Michigan State, two outcomes certainly capable of happening, Wisconsin would get the Nittany Lions in the Big Ten Championship game, certainly a winnable contest. And it would be pretty tough for the committee to leave out a two-loss Big Ten champion in the Badgers.

Oklahoma (9-2, 8-0): Oklahoma’s 56-28 win over West Virginia on Saturday was huge for their résumé that previously lacked a top 25 victory. Still, the Sooners are going to have trouble finding themselves in the playoff due to their weak overall schedule that also contains a 21 point loss to Ohio State and a loss to Houston on the opening Saturday. The tough home matchup against Oklahoma State in two weeks will determine the Big 12 Champion. The game is a must-win for both teams if they want playoff hopes. But it’s not probable we see a Big 12 group represented in the top four this season. Now, more than ever, it’s looking like we’ll get two Big Tens with Clemson and Alabama.

Colorado (9-2, 7-1): The Buffs have really turned it on here as we near the end of the season. They handed Washington State their first Pac-12 loss of the season on Saturday with a 38-24 victory that marked their fifth in a row. This gives Colorado a top 25 victory under their belt, and they also have two quality losses to Michigan and USC. A win against Utah this week would send them to the Pac-12 Championship against the winner of Washington-Washington State. Again, the Pac-12 is another league that is going to struggle to get a team in the playoff, but there’s still a chance we’ll see the conference champion find a way in.

NOT:
Ohio State (10-1, 7-1): The Buckeyes were a two point conversion away from losing all National Championship hopes on Saturday. They struggled to defeat a Michigan State team that’s posted a 3-8 record this year with only one Big Ten victory. That’s not the result Ohio State wanted going into a huge game with Michigan this week. This team has been quite inconsistent all year with close battles against Northwestern and Michigan State but blowouts with Oklahoma and Nebraska. It’ll be interesting to see which Buckeye team we get on Saturday in The Horseshoe.

Michigan (10-1, 7-1): Same story for the Wolverines. Oddly enough, they had some trouble the weekend before the big one, managing only a 20-10 victory over 5-6 Indiana. After their first loss of the year to Iowa and a close win at home in a game that shouldn’t have been a contest, it’s fair to wonder if Michigan is beginning to decline. We’ll find out next week as they take on the Buckeyes in what is probably the most highly anticipated game of this college football season. A win, and they’ll head to the Big Ten Championship for a shot at their first league title since 2004.

Louisville (9-2, 7-1): Louisville had a very small chance of advancing to the playoff even after the loss to Houston. If Clemson would’ve lost to Wake Forest, the Cardinals would have advanced to the ACC title game, and just maybe the committee would have wanted the likely ACC Champion Louisville in the top four. But Clemson finished the job, eliminating Lamar Jackson’s squad from playoff contention, leaving just one ACC team in top four discussion.

SLEEPER:
Western Michigan (11-0, 7-0): The Broncos sit at 21st in the CFP Rankings, indicating the committee has no plans on putting them in the playoff. However, this year serves as a major step in the right direction for unbeaten Western Michigan. If they are able to post undefeated records while still scheduling more difficult opponents in future years, they’ll gain more attention.

There were no top four upsets on Saturday, which makes things much easier than last week. Bama, Ohio State, Michigan, and Clemson stay put in the top four while everybody else moves up with the Louisville loss. Alabama is all but a lock for the playoff, along with a Big Ten team and Clemson, as long as the Tigers win the ACC title game. The fourth spot is probably between another Big Ten, Washington, or the teams ranked in the 8-10 spots, but all odds point towards two Big Tens in the playoff as of now.