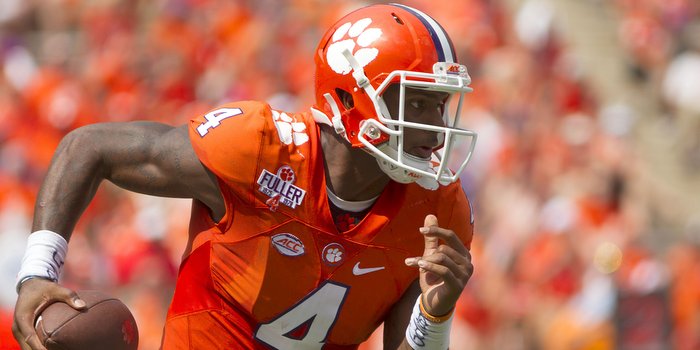 College football fans thought the chaos couldn’t get any higher after last week’s results, but the sixth week of play hosted a 78-0 contest and the #6 team in the nation going down. Here’s a look at the week’s biggest stories.

HOT:
Alabama (6-0, 3-0): The Crimson Tide continue to roll. A 19 point conference victory on the road over the #16 team in the nation leaves people with little reason to doubt Alabama. If they get through Tennessee, Texas A&M, and LSU in their next three games, these guys are surely the best in the country.

Washington (6-0, 3-0): Washington is gaining more believers each week, outscoring their past two opponents by a combined 87 points. A 44-6 win over Stanford followed by a 70-21 victory over Oregon puts the Huskies in playoff conversation. This team is definitely looking like a national championship contender.

Texas A&M (6-0, 4-0): The Aggies picked up a huge double overtime win over Tennessee on Saturday to stay undefeated. However, the big test for Texas A&M comes next week as they take on top ranked Alabama in Tuscaloosa. Nobody sees them winning this one, but if they pull it off, they’d be the only unbeaten left in the SEC and a must watch team for the second half of the year.

NOT:
Houston (5-1, 2-1): The Cougars are now out of playoff contention. Most thought it would come down to the game against Louisville in mid-November, but Navy shocked Houston 46-40 to crush their dream of competing for a national title this season. Nonetheless, 5-1 is a great first half for Tom Herman’s crew who is now fighting for a conference championship.

Stanford (3-2, 2-2): Stanford has completely fallen out of the picture after consecutive losses for a combined margin of 64 points. The Cardinal fell at home to Washington State on Saturday night in a game that may have pushed them out of the top 25 completely. They still have some difficult Pac-12 contests to go and a road game against Notre Dame next week. Luckily, the Irish are in an even worse position. Look for Stanford to capitalize on that and get back on track.

North Carolina (4-2, 2-1): After a dramatic game-winning field goal over ACC powerhouse Florida State, a 31 point home loss for the Tar Heels was very unexpected. Virginia Tech smoked North Carolina and held them to a lone field goal. The game marks a changing of the guard in the Coastal division as the Hokies take the top spot.

SLEEPER:
Boise State (5-0, 2-0): Houston’s loss leaves the door open for Boise State to be the mid-major unbeaten fighting for a spot in the playoff. The difference between the two, however, is that Houston has a much tougher schedule. The Broncos are going to have to blowout some of their opponents to make a case, but if they keep winning they will be a top ten team by the end of the year.

Not much to talk about here. These three seem to be fairly secure in the top spots for now. We have yet to see any of them really have a bad performance. Jake Browning of Washington likely sits in the fourth position right now after an eight touchdown game over Oregon, but Watson, Jackson, and Barrett are going to be tough to catch.

No changes in the top four, but Washington looks really strong and is just waiting for someone to fall out of that playoff picture. After three top ten losses from Houston, Tennessee, and Miami, the 8-10 spots remain quite loose. Wisconsin and Nebraska move up even after a bye week and Tennessee only falls to #10 after a double overtime loss to the undefeated Texas A&M.