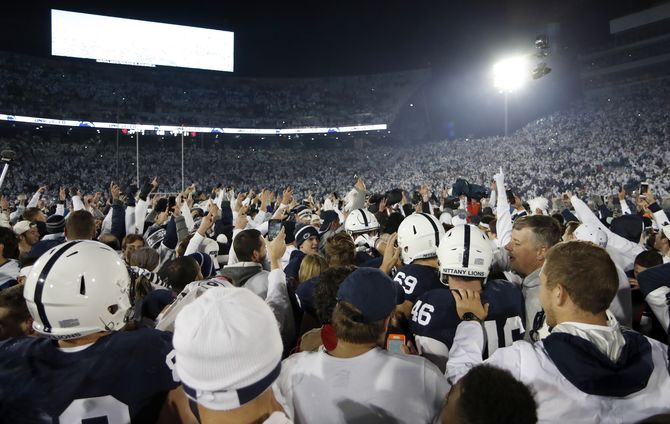 It was a fairly straight forward week in College Football until Saturday night. Alabama won what was expected to be the marquee matchup of the weekend by 19 points, while Michigan, Washington, and Louisville all kept rolling with 20+ point victories. But the #2 team in the nation failed to get the job done in Happy Valley and will fall out of the top four as a result.

HOT:
Alabama (8-0, 5-0): The Crimson Tide simply show no signs of slowing. They were able to run away with a game that was close at the half in defeating 6th ranked Texas A&M on Saturday. Alabama has built a strong offense around QB Jalen Hurts in addition to its always powerful defense highlighted by Reuben Foster and Ryan Anderson. An undefeated year is very possible for Alabama, but they take on a hot LSU team in Baton Rouge in two weeks.

Michigan (7-0, 4-0): The Wolverines got just what they needed this weekend. Not only did they blowout yet another Big Ten opponent in Illinois, but the Buckeyes finally went down. Expect Michigan to reach #2 in the polls this week. They now have the edge over Ohio State and control their own destiny in the Big Ten. Of course, everything depends on the November 26th duel in Columbus, but now Ohio State cannot afford to lose that one, whereas the Wolverines might still have playoff chances if they dropped a close one.

Louisville (6-1, 4-1): Louisville looked a lot better than their 10 point win over Duke in Week 7. They scored over 50 points for the fifth time this year in a 41 point victory over NC State. If teams like Ohio State keep losing, the opportunity will be there for Louisville to slide right back into the top four. Especially because their only ranked opponent left on the schedule is Houston, who may drop out of the polls after a blowout loss to SMU.

NOT:
Ohio State (6-1, 3-1): Nobody saw the Buckeyes going down on Saturday night. Ohio State escaped last week’s test on the road against Wisconsin, but this weekend’s contest at Penn State proved to be the bigger obstacle. In a game where J.T. Barrett threw for just one touchdown, the Buckeyes just could not get their typical high-powered offense going. This one hurts the résumé for sure, but a one loss season and a Big Ten championship could get them in the playoff. The Michigan game at home is now a must-win for Urban Meyer’s group.

Houston (6-2, 3-2): Just a few weeks ago, Houston was talked about as one of the best teams in the nation, and now they are not even the best in the AAC West, sitting at fourth place in that division. The Cougars’ 22 point loss to now 3-4 SMU is their second in the past three weeks, and they will likely not see the top ten again this year. With a big home game against Louisville coming up, this team needs to find a way to get back on track.

Arkansas (5-3, 1-3): SEC play has not gone well for Arkansas so far. The Razorbacks fell 56-3 at Auburn on Saturday marking their third loss in the past five weeks. Losses to Texas A&M and Alabama are acceptable, but this team was simply embarrassed against Auburn in a game where the Razorbacks were outrushed 543-25. Arkansas has another big one after their off week at home against Florida.

SLEEPER:
Western Michigan (8-0, 4-0): The Broncos are by all means capable of an undefeated season. Saturday’s win over Eastern Michigan puts them at 8-0 for the year, and don’t forget that this team has two Big Ten wins under their belt in Northwestern and Illinois. With Houston out of the picture, the only undefeated mid-majors fighting for attention are Boise State and these guys.

The Huskies finally get their spot with Ohio State’s loss, and they could even move to #3 since Clemson did not play. Other than that, there’s not much to question as far as the top four as Bama, Michigan, and Washington all looked great this week. Louisville, Nebraska, and Baylor all move up as well due to the Buckeye loss. Texas A&M isn’t penalized too much for a road loss against Alabama leaving them at #8, but it’s hard to slide Wisconsin ahead of Ohio State after we saw the Buckeyes defeat the Badgers just last week.

Lamar Jackson is still the top dog, but we finally saw J.T. Barrett struggle this week against Penn State, and Jalen Hurts has done an outstanding job leading this Alabama team to 8-0. After Jackson the Heisman picture is becoming somewhat cloudy with Jake Browning, Jabrill Peppers, and Barrett all still in the mix as well, but Lamar Jackson is, without a doubt, our leader.