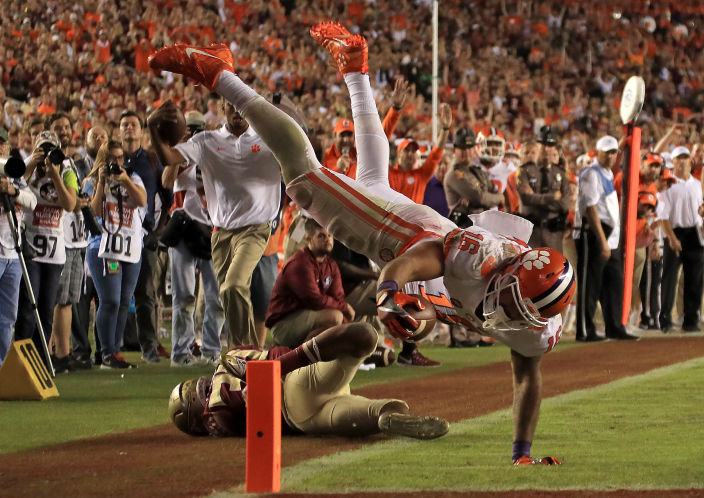 Four unbeatens went down while some top ten teams survived scares in another crazy week of college football. As the season’s end draws near, here’s a look at where we stand after nine weeks of play.

HOT:
Clemson (8-0, 5-0): Another tight one for Dabo Swinney’s bunch, but the Tigers always seem to find a way to come out on top. The team has now won 22 of its past 23 games, and with no more ranked opponents left on the schedule, could easily find themselves looking at another undefeated regular season. The ACC Championship will be the deciding factor for Clemson. It’ll likely be against North Carolina or Virginia Tech, both of which are capable of pulling an upset.

Washington (8-0, 5-0): Jake Browning led the Huskies to their eighth victory of the year against #17 Utah in a game that will pad the Washington résumé a bit more. They have put themselves in a comfortable position where if they win out, there will be no questions about this team getting in the playoff. They have five more Pac-12 contests, including their likely appearance in the championship game, which could be a rematch with the Utes.

Wisconsin (6-2, 3-2): Wisconsin picked up a huge win over Nebraska on Saturday, handing them their first loss on the year. This Badgers team has been consistent all year, and people often forget they were 7 points away from beating Michigan and Ohio State. If those two matchups go the other way, we’re looking at the 8-0 Big Ten frontrunner in Wisconsin. Though the two-loss Badgers making the playoff would be a long shot, especially with losses to the Wolverines and Buckeyes, it is not impossible considering they should rise in the polls this week after a big win and three top ten losses.

NOT
Baylor (6-1, 3-1): The previously undefeated Bears are really going to struggle to make the top four by the end of the year after falling to Texas. The road loss was unexpected after Baylor was able to destroy Kansas by 42 in Week 7. Nonetheless, it’s going to take a lot for them to get back in the picture.

West Virginia (6-1, 3-1): Same story for the Mountaineers. This is another Big 12 group that fell from the ranks of the unbeaten in Week 9 with a loss to Oklahoma State in Stillwater. Now, Oklahoma, Oklahoma State, Baylor, and West Virginia are all fighting for the Big 12 title, and the December 3rd Bears-Mountaineers battle will surely play a big role in deciding our champion. However, it’s now unlikely we’ll be seeing the Big 12 in the January playoff.

Boise State (7-1, 3-1): Boise State’s road loss to Wyoming leaves Western Michigan as the only mid-major that could potentially sneak in the playoff, but it’s looking like an all power five year to compete for the national title. The Broncos barely outlasted BYU in Week 8, and the Cowboys, who remain undefeated in the Mountain West, proved to be too much for Boise State, winning this one on a late safety.

SLEEPER
Florida (6-1, 4-1): Florida is a one-loss SEC team that has quietly entered the playoff conversation. They are the clear favorites in the SEC East, but they close the year with a road set against Florida State and LSU, both of which will be challenging tests for the Gators.

Week 9 saw five top 15 losses, three of which were top ten. While the top four should remain the same, the 5-10 spots will be shaken up. Louisville stays at #5 despite a scare from Virginia. Wisconsin moves up to #6 with a big win over Nebraska and Baylor and West Virginia losses. Texas A&M benefits from the Big 12 slides as well. Ohio State has not looked good at all in their past two contests, so #8 is generous for them. Florida jumps in at #9, again thanks to the all the upsets this week, and Nebraska only falls to #10 after a hard-fought battle with the Badgers.

Not much more to talk about with Jackson and Watson at the top, but Jabrill Peppers is the best player on the only undefeated team in the Big Ten now, and he’s leading this team to victories on both sides of the ball. Peppers had a rushing touchdown, seven tackles, a sack, and 23 return yards on Saturday. Not many college football players are capable of flaunting that statline, which is why Jabrill Peppers enters the top three.