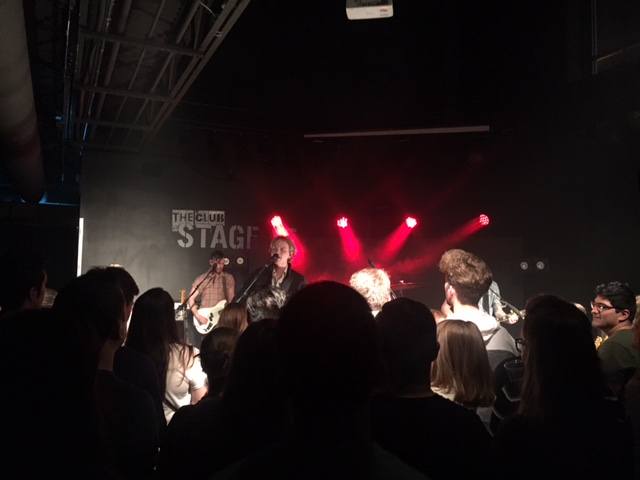 The show took place in The Club at Stage AE, which is an offset from the main stage where the merch table is usually set up. I walked in as the opener, Deep Sea Diver, was beginning their set and I was immediately entranced by the lead singer’s resonant vocals. Her voice sounded similar to that of Beach House but the music behind her was much more straightforward indie rock. Most of their songs were full of long instrumental breaks with dazzling guitar effects throughout. However, the very young, mostly male crowd did not appear to be engaged with their music during the set.

Once Colony House took the stage, the audience livened up instantly as the band started with a loud bang and vivid, gleaming lights. They opened with “Cannot Do This Alone”, the first song off their brand new record Only The Lonely. Their set was accompanied by bright visuals on a large LED screen behind them, mostly flashing aesthetic pictures that went along with the song they were performing. Colony House captivated the crowd with their catchy guitar riffs, smooth lead vocals, and satisfying harmonies. They played through almost the entire track listing of their new album; only one song from their previous album was played until the end of the show. Then the band left the stage with the exception of the lead singer, Caleb Chapman. He broke his silence by talking about the first song he ever wrote for Colony House, then sang it acoustically until the band eventually joined him back onstage and sang the rest of the son around a single microphone. Only this and one other slower acoustic song, “This Beautiful Life”, broke up the set filled with their uptempo, head-bobbing, riff-heavy rock tunes. They couldn’t help but play to the local audience at one point, displaying a video inside of Heinz Field at a Steelers game, which was met with enthusiastic cheers. They then played their next song with “Pittsburgh” flashing in different colors on the screen behind them. Once they finished their final song, the surf rock jam “You Know It”, they bowed and left the stage without an encore. I seemed to be the only one confused, as the venue turned the lights on and the crowd proceeded to file out. Despite the strange ending, Colony House put on a bright, electrifying show that had me singing their songs all the way back home.