While many bands try to distance themselves from labels, Coping Skills fully embraces their brand and describes themselves on Bandcamp as “moderately gay post-ironic bummer pop.” They take this same boldness and apply it to their music. Coping Skills is completely unapologetic for discussing their experiences with topics such as heartbreak, self-growth, and the uselessness of a college degree.

Coping Skills formed after the two front-people, Rachel Dispenza and Lauren DeLucca, decided to start a band after two years of navigating the local DIY music scene together. The pair have been performing together since 2015 and released an EP titled Everything is Stupid + I Hate It that same year. Typically, they play shows with a drum machine, however, on both their debut LP Relateable Web Content and here on WPTS, their friend Sam Becht filled in on drums. 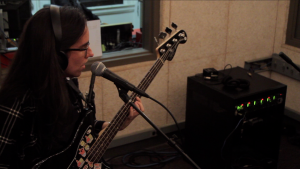 Coping Skills is completely unapologetic for discussing their experiences with topics such as heartbreak, self-growth, and the uselessness of a college degree.

The album version of their song “Drop Out of College” features surfy-guitars matched with washed-out vocals. This is in stark contrast to the version they performed on WPTS which provides a more raw and organic feel. The two vocalists yell together in unison about the thousands of dollars they had to spend on getting an education, but hold waitressing jobs instead of in the industry they got their degrees in. Personally, I think that everyone of college age can relate to this song while debating on whether or not studying for a test is really worth it. I will definitely be keeping an eye out for Coping Skills’ future releases.

You can tune in for WPTS Live Show every Wednesday night at 9:00 on www.wptsradio.org, RadioFX, or 92.1FM Pittsburgh.