“Could it be Different?” by The Spook School – Review

This review was brought to you…

Since 2011, The Spook School has harnessed the energy and fun of their scrappy pop punk sound to deliver countless jams dealing with themes of change and sexuality. Blatantly queer, silly, and outspoken, they have an undeniable ability to soundtrack the lives of the oppressed and optimistic in the form of raw, loud pop songs. For that reason, any new music from the Glasgow quartet that already gave us bops like “I’ll Be Honest” and “Binary” was going to catch my attention. Considering their natural talent and the fact that this album was written over the course of Brexit and an awfully rough time for the LGBT+ community (which would be touched on in the lyrics), I came in to Could It Be Different? expecting nothing less than a stellar album of tracks marked by optimism and empowerment. 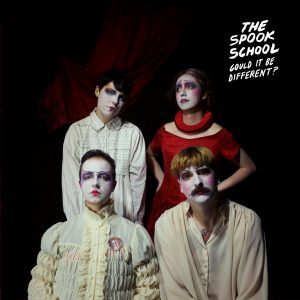 I’m happy to say Could It Be Different? has given me everything I hoped for and more. The album begins with a bold and energetic blast in the form of lead single, “Still Alive.” The song, addressed to an abuser, is a powerful anthem of survival and defiance, culminating in a chorus with ever so pleasant shouts of “F**k you, I’m still alive.” The track is emotional rebellion of the purest form and it is sure to be stuck in your head for days. It takes the Spook School formula I and many others have grown to love and pushes it to new heights, resulting in what is likely the most recognizable and empowering song in their entire discography.

Another highlight, “Less Than Perfect” begins with driving bass and shimmering guitar before going full speed ahead into a rush of similarly hook-heavy pop punk that is both infectious and emotionally sharp. In the middle of winter, this track is a summertime jam that champions the spirit of youth in a way that feels timeless and effortless. Just as expected, The Spook School then shift focus to the events of the past year with the aptly named “Bad Year.” The track begins with the feeling of defeat, with lines like “It’s been a bad year and I don’t think it’s getting any better any time soon.” However, even this song holds on to the sense of hope that lies at the core of everything The Spook School has ever done.

The back half of the album is admittedly a little more by-the-numbers indie rock, touching on subjects like watching your ex get engaged and other relationship matters. “Body” is one notable exception as it opens with the goofy but honest question, “Do you like the way you look naked?” The track conveys a great deal of we’re-in-this-together attitude as it turns issues of sexuality and gender into a means of unity that is uplifting and touching. This spirit is what The Spook School is all about and Could It Be Different? captures this true essence better than all of the albums that have come before it. The result is an undeniably fun and powerful group of tracks that make up the best album of their career thus far.

You can follow Ryan on Twitter @surfboredryan, and catch him on Tuesdays from 6 PM to 8 PM on WPTS Radio’s premier punk rock show: Electric Banarama! This review was edited by Calder Buisch of the WPTS Editorial Board.