With the 2015 football season just 10 weeks away, WPTS Radio and WPTS Sports are featuring a new weekly “Countdown to Kickoff” where I will address a different issue surrounding the Pittsburgh Panthers heading into the 2015 campaign.

The feature will run from today until the day of the Home Opener (September 5th) against Bo Pelini and Youngstown State. This feature will be all encompassing- addressing issues on both sides of the ball, as well as off the field concerns.

First year head coach Pat Narduzzi has a problem. This issue isn’t a new one, and has plagued Pitt coaches dating back to names like Walt Harris and Dave Wannstedt- affectionately referred to as “Wanny” by the Pitt fateful.

This problem isn’t an easy one to fix, at least on the surface.

Since Pitt has moved into Heinz Field, the Panthers have averaged 60,000 fans just once (2003 when the team went 8-5 and featured Heisman hopeful and future All-Pro WR Larry Fitzgerald.)

From 2004 until the 2014 season, the Panthers averaged just over 45,000 fans a season. This number may even be inflated, because it includes matchups with Notre Dame and local draw West Virginia during the “Backyard Brawl” years.

Regardless, the numbers are ugly.

And while the Panthers teams haven’t enjoyed a ton of success over that span, the team won a share of a Big East Conference Title in 2004, and won nine games in 2008.

During the ’04 season, the Panthers drew 50,000+ fans just once- the Backyard Brawl against West Virginia.

In 2009, the Panthers hosted Cincinnati for a chance at the Big East crown and a BCS Berth. The game was played on an absolutely miserable day for Football. The temperature dipped below freezing at kickoff, and the wind chill hovered near zero degrees.

Despite the poor weather, the Panthers still drew an announced crowd of 63,387 (approximately 1500 fans short of a sellout), proving that Panthers fans will support a winner.

In 2012, the Panthers left the Big East for the Atlantic Coast Conference.

The move cancelled the annual battles with historic foes like Penn State and West Virginia- games that consistently drew near sellout or sellout crowds.

To make matters worse, the Panthers lost their annual game with Notre Dame as part of the new ACC alignment, instead being placed in a semi-annual rotation that will see the Fighting Irish and Panthers play just three times over the next six seasons (2015 at Heinz Field, 2018 at Notre Dame, and 2020 at Heinz Field).

Since Pitt joined the ACC, the Panthers have sold out Heinz Field twice. The first instance was for the primetime Labor Day Inaugural Game against eventual National Champions Florida State, and the second was against Notre Dame that same season.

Last season Pitt drew just over 40,000 fans a game, the programs lowest output since 2007. Against Duke, on a cold rainy post-Halloween Saturday, the Panthers drew just 39,293.

Over the past few weeks, the new coach has embarked on a program called On the Prowl, where Narduzzi has visited New York, Washington DC, Atlanta, Philadelphia, and Fort Lauderdale, before finally finishing up with stops in the North and South Hills of Pittsburgh.

Throughout each stop, Narduzzi has done a question and answer session with the audience. In almost all instances the coach has reiterated the importance of fan support.

Narduzzi and new Athletic Director Scott Barnes acknowledged that the Athletic Department has to examine the current game day experience with the hopes of keeping fans and students cheering, engaged, and in attendance. Under the current setup, Pitt Students are able to leave as early as the end of the first quarter on University provided transportation.

Since arriving on campus, the Pittsburgh Staff has been preaching the importance of keeping the local recruits (WPIAL) inside the city limits. Pitt has created a weekly Wednesday photo feature called WPIAL Wednesdays- a program that highlights WPIAL players who are currently playing for Pitt.

In addition, the Pitt Staff has created a new hashtag on Twitter- the #412Crew. And while anyone who commits to Pitt is considered a member of the “412 Crew”; this idea is clearly focused on pushing the idea of playing for the hometown team. 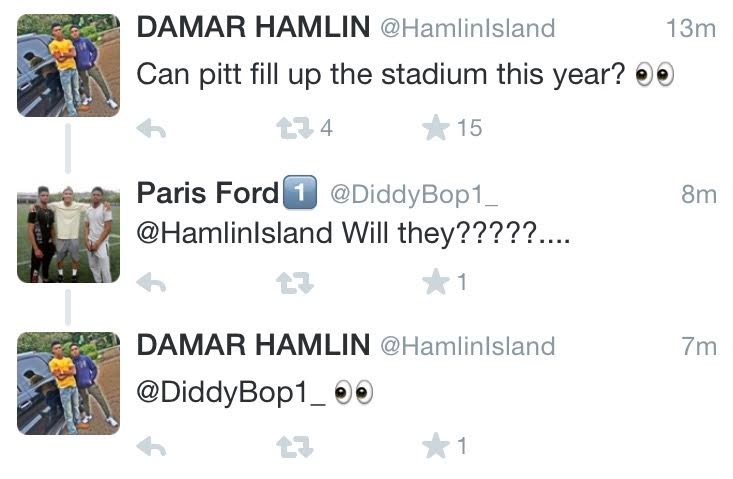 The conversation, which is included above, is between Damar Hamlin (HamlinIsland) and Paris Ford (DiddyBop1).

Hamlin is the number recruit in the State of Pennsylvania for the Class of 2016, and has offers from schools like Clemson, Penn State, and Ohio State. While Ford is also a top recruit (Class of ’17), boasting offers from UCLA, Tennessee, and Notre Dame in addition to the usual suspects like WVU, Ohio State, and Penn State.

In the case of Hamlin, the decision is probably down to Pitt, Penn State, and Ohio State, with the defending National Champs holding a slim lead over Pitt and Penn State.

In terms of Paris Ford, the saga has many more twists and turns before February 2017.

Despite all the uncertainty, one thing is crystal clear.

For Pat Narduzzi and the Pitt program, now is the time to change the culture, because all eyes are on the Panthers in 2015.