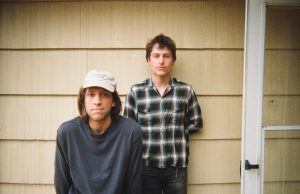 Cranberry is the second album released by the Austin-based band Hovvdy. This was one of the most highly anticipated bedroom pop releases of 2018, and I have been looking forward to listening to this since it was announced. Hovvdy’s first full-length Taster was one of my favorites from last year, and I expected that Cranberry would be an appropriate follow-up that demonstrated their growth as a band. I enjoyed listening to this album, however, I couldn’t help feeling like something was missing throughout the record.

To quote my roommate, Hovvdy sounds like “if (Sandy) Alex G was a full band.” At first I thought this was a compliment, but I eventually realized that this describes the best and worst parts of Hovvdy. The band is a great example of dream/bedroom pop, but they lack the creativity to stand out amongst other similar artists.

Much of the hype I had for Cranberry stemmed from a series of singles that were released towards the end of last year. “Late” was my favorite early track because the entire band comes together to form a carefully crafted sound, which is something I felt was lacking on Hovvdy’s earlier discography. The simplicity of the track sounds like an homage to slowcore bands of the 90’s, while still allowing the band’s signature pop style to shine through. After listening to the full album, I decided that this was still my favorite song, which was disappointing to say the least. Personally, I get upset when bands release the strongest songs from their album as singles because the rest of the record pales in comparison, which is precisely what happened with Cranberry. There are other enjoyable tracks, such as “Thru”, “Float”, and “Quitter,” but they cannot hold their own against the singles that were already released. The rest of the album sounds too similar to Hovvdy’s previous work make an impression amongst the handful of great tracks present here. “Late” could have very easily become a sleeper hit among their fanbase if it wasn’t released as a single, and the Cranberry would be much more exciting.

Cranberry is a solid sophomore effort from the band, but they have a long way to go before they can receive praise for being a unique act. While there are some stand-out tracks scattered throughout, the album as a whole falls flat of my expectations.