It’s tempting to lump the loose canon of compilation CD’s, AMV’s, and 10-hour YouTube videos with titles in all caps known as “Eurobeat” into the “internet meme music” pile. Some would put it right next to vaporwave, chiptune, and whatever we’ve decided to call the infinity of rap produced by ink-faced tweens with access to Xanax and firearms. But this would be both incorrect, as the majority of what we now call “Eurobeat” was recorded from the late 80s through the 90s, and also a disservice to one of the most interesting genre evolutions in modern pop music.

Eurobeat, a loose term drawing the boundaries of a very vague genre, is the product of a royal marriage of European dance pop influences, Italy’s Italo-Disco and British Hi-NRG, that went on a Marco Polo journey of sorts across the Eurasian continent to become a legitimate cultural phenomenon in Japan. The genre’s blistering BPM counts, ear-worm percussion, and hokey nonsense lyrics about driving cars fast (the best kind of lyrics for dance music), found success in Japan via compilation tapes rather than traditional albums. Most notably, music importer and multimedia conglomerate Avex’s Super Eurobeat series, which has run for over 25 (!) years and 249 (!!!) volumes, and that’s not even counting the catalog of “Super Eurobeat presents” albums released under the brand’s banner. 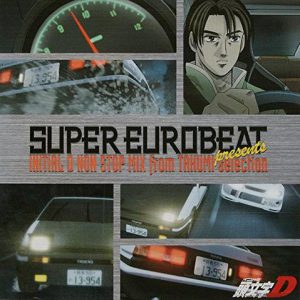 Eurobeat was then able to jump the Pacific Ocean into the Americas via its ubiquitous presence on the 1998 animated series Initial D and the early music sharing communities of the infant internet. Eurobeat works wonders for Initial D, as it’s rural downhill drift racing with the occasional requisite 90s anime philosophizing and romance subplot eschews the urban hip-hop of the Fast and the Furious series for the slick, pulse pounding futurism of Eurobeat and profits by it. The series mix of hand-drawn animation of human characters and early cg animation for the cars would risk feeling plastic and lacking weight without an appropriately over the top soundtrack to give drifting around corners in a 86 Toyota Corolla labeled for tofu delivery the appropriate gravitas.

Eurobeat’s compilation-tape driven business model at its zenith means that notable artists are slightly hard to isolate. Certain names do show up multiple times, but they’re equaled by artists producing one song and then never again. I kind of like it, the format makes it a given that you’ll get a mix of vocalists in both gender and nationality, and also that a variety of producers will keep you from picking up on habits in the individual beats. Lyricism is not the focus here, but those looking for musical depth may find themselves pleasantly surprised by the complexity of the mix on some songs.
The charm of Eurobeat comes in its anachronistic qualities when cast against the modern musical landscape. It’s consistent lightning quick sonic assaults are a welcome departure from modern drop focused corporate EDM and its disarmingly earnest misspoken English lyrics are a breath of fresh air in an irony suffocated world. I’ll take hokey nonsense over lowest-common denominator algorithm-generated “cool” every day of the week. Listen to it while you read, while you clean, while you get ready in the morning, but most importantly listen to it while you drive. That’s what it was designed for. 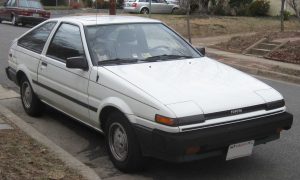 If you’re a radical groovy person that likes to (legally) drive cars fast and you’d like to sample some Eurobeat, you may be pleasantly surprised to learn that three compilations specially selected from the Initial D soundtrack are currently available on Spotify. Unfortunately, due to the way compilations and copyrights work in a digital environment, there are some notable gaps (no Gas Gas Gas? No Night of Fire? NO DÉJÀ VU? For shame.) So; I’ll give you the advice all true Eurobeat patricians already know, go on YouTube and click on the longest compilation with the most words in the title. Bonus points if it plays over real life footage of people driving like maniacs obsessed with turning their tires to smoke.