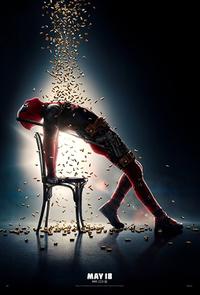 If you’re looking for a movie that starts with a bang and lots of fourth-wall-breaking goodness, Deadpool 2 just might be the movie for you. Releasing this Friday, May 18, Deadpool 2 follows the original Deadpool’s release in February 2016. This sequel is sure to amuse fans of the first film, as well those who haven’t yet watched any of the movies from the X-Men side of the Fox Marvel Universe. But be warned, Deadpool 2 has definitely earned its R rating.

Deadpool 2 begins an indeterminate amount of time after the first movie ended. Wade Wilson (Ryan Reynolds) has recently returned home with his fiancee Vanessa (Morena Baccarin), but, through a turn of events, becomes involved with the X-Men. Eventually, he starts his own group – the X-Force – made up of Domino (Zazie Beetz), Bedlam (Terry Crews), Zeitgeist (Bill Skarsgard), Shatterstar (Lewis Tan), and Peter (Rob Delaney). The X-Force aids Deadpool in his goal to protect teenage mutant Russell (Julian Dennison) from the time-traveling Cable (Josh Brolin).

The movie starts out with jokes to get you laughing, and continues on that way for the majority of the film. Although there are some serious parts, they are framed very closely, and are often broken up by more jokes. However, this is expected, since it is a Deadpool movie, that wasn’t too surprising. While familiarity with the previous Deadpool/X-Men movies isn’t necessary, many of the jokes will certainly make more sense with a knowledge of these franchises.

From a technical standpoint, this movie is pretty cool. The special effects from all the battle scenes are incredibly graphic, so if you aren’t into gore, you may want to consider skipping this one-you’ll find yourself needing to cover your eyes (and even ears) quite often. As Deadpool’s powers make him unable to die, the filmmakers had fun breaking his body in as many ways as possible-gun wounds, broken bones, and even getting ripped in half. As seen in the trailers, all the visual effects are epic. With a movie of this budget, incredible effects are to be expected.

Overall, I found Deadpool 2 to be a lot more enjoyable than Infinity War, and more memorable than the original. While the latest Avengers movie villain, Thanos (also played by Josh Brolin), lacked a well-developed backstory, Deadpool 2’s Cable has a solid backstory that is elaborated upon sufficiently enough for the audience to understand his motivation. Additionally, the Avengers movies have a history adding humor where it feels forced and unnecessary, and this becomes even more apparent in Infinity War. Meanwhile, Deadpool 2 is intended to be a comedy, and therefore humor is a vital part of the experience.

Deadpool 2 is definitely a movie worthy of multiple watches, especially with the amount of blink(with your ears)-and-you’ll-miss-it jokes based on references to other movies or events that you may miss the first time around. If you do choose to go see Deadpool 2, stick around through the credits. Those scenes are probably the all-time best credits scenes, and quite possibly the loudest the audience laughed throughout the whole movie.