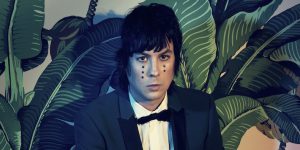 You’ve probably been exposed to Johnny Jewel’s work already without your knowledge. That exposure may have come through his Hollywood soundtrack work (most notably Nicolas Winding Refn’s excellent film Drive and David Lynch’s long awaited third season of Twin Peaks,) through his record label Italians Do It Better, or through the handful of electronic acts he’s a part of (Chromatics, Glass Candy, Mirage, Desire, and Symmetry.) One frantic Google search after my first casual listen turned into a full cover to cover listen of what has turned out to be one of my surprise favorite albums of 2018 so far.

The depth of sound achieved over the 19 tracks of “Digital Rain” is nothing short of astonishing. This is mostly attributable to the sound mixing, which allows the album’s ice-cold soundscapes to feel truly three-dimensional, enveloping the listener and forming a clear canvas for Jewel’s vaunted analog production to deliver its titular “rainy day in the city” vibes directly into your ear-holes.

All of this jargon is to say that most of what makes Digital Rain such a uniquely charming album lies in its tricks in production, which is perhaps no surprise given that we are in fact listening to the work of a producer.

Jewel has a reasonably full bag of tricks, and rather than falling into the perennial electronic music trap of wearing the listener out within 5 minutes of listening with more “serious” ambient electronic pieces he bookends the album with a pair of them (the titular “Digital Rain” and its evil twin “Houston”). He fills the interim with a grab-bag of jaunty little house-style tracks and musical experiments that allow Jewel to truly demonstrate his mastery of sound mixing tricks.

Before “Digital Rain”, I haven’t been able to get into the more ambient side of electronic music. This album has had my attention for the better part of two weeks, and that’s mostly due to the unique approach. Whereas other producers try to wow the listener with depth and subtlety of production or technical mastery, this album has clearly been crafted with the intent of creating a mood. That mood happens to be “being caught in the rain in the middle of Blade Runner’s downtown Los Angeles because your VR shades didn’t inform you of the incoming inclement weather, and now you’ll be all soggy while you take the communal rideshare home.” Lucky for Mr. Jewel I find that mood charming- in fact, I find all of “Digital Rain” charming and wholly appropriate background music for my own rainy cityscape.

You can tune in on Fridays from Noon to 2 PM to hear John co-host the Post Punk Roc Bloc on WPTS Radio. This review was edited by Dustin Butoryak of the WPTS Editorial Board.