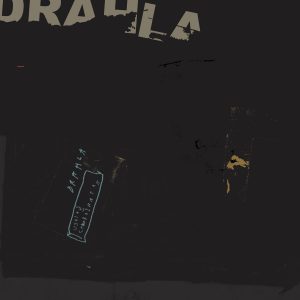 I had my concerns going into Useless Coordinates. I have been following Drahla since I stumbled upon “Fictional Decision” on Bandcamp and absolutely fell in love with the B-side “Dog Collar Guillotine.” As Drahla continued to release more music, I continued to enjoy their output, but always with a reserved distance and a sense that something was missing. They hadn’t transcended that threshold from “punk music I like” to “punk music I think is essential.” Until Useless Coordinates.

The first thing one will notice about the album is the visual aesthetic, a dark, scratchy, bathroom stall graffiti meets industrial blueprint style that calls to mind a Dadaist painting. This is a pretty perfect visual allegory for their sound. Useless Coordinates blends elements of mid-80’s post-punk with 90’s post-hardcore and maybe a hint of Zornian Jazz, but all in a blender that feels very contemporary. It’s music that is difficult to pin down, going from glossy and polished reverby guitars to abrasive noise punk seamlessly at the drop of a hat. It has real anxiety to it, at once melancholic and frustrated. The lyrics are generally abstract and existential, and they are delivered in a confident and dramatic voice that makes the listener understand that Drahla is a band with something to say.

While all the songs are consistent in vibe, they draw from a unique and varied sonic pallet. Generally, the album is divided into short songs that are packed to the brim with transitions and elements. The two-minute banger “Serenity,” opens with a tense riff and layered vocals that create a paranoid, energy that is built upon through the song with several motifs, before the guitars and horns scratch into climax. The longest song on the album, the five minute “React/Revolt” is also an anxious listen, using a two and a half minute long intro that sounds like it came from Noir soundtrack composed by Naked City set to a scene of an old PI walking a gritty street before being attacked by an invisible force to the sound of a screeching saxophone before the main riff comes in for the rest of the song. One of the singles from the album, “Stimulus for Living” paints a very bleak image of contemporary culture and is punctuated by, what I imagine to be, plucked strings on the guitar head but could also be a high-pitched paranoid woodblock. Drahla has a sound, and it’s a pretty cool sound, but it is a sound. Despite the number of different elements and techniques they use to achieve that sound, it is consistent through the album, and it definitely means its for a specific audience. Additionally, it does not really have any absolute defining bops. There are songs I like more than others, but when listening to this album, for better and worse, there are no songs that stand head and shoulders above the rest. It lacks a universal-playlist-song but, in its stead, we have 10 solid tracks.

Useless Coordinates is a worthwhile listen for fans of noisy arty rock music. It inspires a sort of luscious angst in the way good post-punk often does. With it, Drahla solidifies their position as one of the bands to watch in this era of Bandcamp punk.