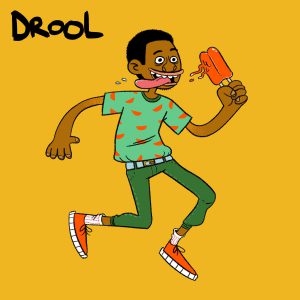 Drool, the first major label release (Father/Daughter Records) from Chicago’s multi-talented musical savant Nnamdi Ogbonnaya, covers so much ground in under 40 minutes that I literally don’t know what to do with myself after each listen. The cartoon cover art and jovial/bouncing sound of many tracks lulled me into a sense of security, and it wasn’t long before I had several songs stuck in my head. After listening to “Think That Way” a few times, I had a sudden realization – Nnamdi’s lyrics are incredibly thought provoking and oftentimes quite morose. I found myself caught in a beautifully painful dilemma: well-written, all around catchy songs grew roots in my brain, however they discussed a range of quite difficult topics from the existential dread of disappointing everyone you love to police brutality in Chicago to the paralyzing panic of loneliness. Drool has effectively caused me to switch between dancing and physically tearing up several times all during a walk to class and I am absolutely floored because of it.

Drool is by-and-large self-produced, and evokes a pleasant walk through a cartoon wasteland. Jangly synths paired with innovative trap beats and Nnamdi’s confident, goofy flows create artistic magic. Though consistently mellow and melodically comforting, this album will make you dance in public. Heavily altered vocalizations and harmonies flow into and out of Nnamdi’s orchestrations, creating a vast soundscape that ably punctuates emotional highs and lows- sans lyrics. “Think That Way”, one of the more emotional songs on the album, begins with somber bass and trickling synth melodies. Gradually, Nnamdi introduces cascading, tightknit harmonies that devolve into a frantic repetition of “Again and again/again and again”. This resolves in a jazzy, extremely satisfying chord comprised solely of layered voices that ultimately fades back into the somber pulse it was born from; put simply, there is a clear story told in his music without a need for lyrical clarification.

Another notable emotional moment includes his nuanced ruminations on romance in “Me 4 Me”. He openly discusses his light-hearted yet deep yearning for genuine love, singing “I want someone that will love me for me/and not the person that you think I oughta be/…I just wanna, wanna be loved/I just wanna, wanna be loved”. Despite his success with multi-faceted explorations of difficult emotions, Nnamdi knows how to write a banger that slaps just as hard as most top 40 rappers we see today. Tracks such as “iVyTRA” and “drOOl//drink that” fuse his detail-oriented perfectionism with an unparalleled goofball energy. His succinct, poignant reflections on life give way to some of the most inventive, oddball lyrical constructions I’ve ever had the pleasure of hearing. In “drOOl//drink that”, Nnamdi bellows out “Stinky boxers stagnant water unfulfilling feeling killing/Nasty putrid sack of wrinkly waste of human flesh and bones.” He also briefly borrows Drake’s “Jumpman” flow which, despite the blatant irony, makes the track slap even harder. In another notable banger, “let gO Of my egO”, Nnamdi raps “Oh I poked the no no/And they scold the wood Gipetto/Rigor mortis after coitus/You know they don’t wanna let go/Buddha rub the belly/R the Kelly, make ‘em echo loud/Get up off that, get up off that/Let go of my ego now”

The nuance in Nnamdi’s work is unsurprising given his diverse personal history and musical experience in Chicago’s music scene. Much of Ogbonnaya’s work pokes fun at his diverse culture experiences, having grown up Jewish and Nigerian-American in Chicago. He is currently active in groups such as, but not limited to, Monobody, Itto, Teen Cult, The Sooper SWAG Project, and Nervous Passenger. He also has several solo projects, and has toured for years with many groups ranging from math to jazz to punk to hip-hop. I sincerely hope Nnamdi visits Pittsburgh to perform at some point, as his live performances are extremely entertaining and chock full of positive energy (you’re always welcome at WPTS, Nnamdi!). Whether you’re feeling radiant or feeling especially blue, Nnamdi Ogbonnaya’s Drool has something for you. Every time I listen to this album I discover a new emotional/technical layer; whether this layer is outwardly goofy, subtly poetic, or all around difficult to grapple with, I never cease to marvel. Do yourself a huge solid and check it out.

You can turn in Sundays from 6 to 8 PM to hear Dustin host “Fine… Whatever” on WPTS Radio. This review was edited by John Wright of the WPTS Editorial Board.