Duke topples Pitt 86-64 in first round of ACC Tournament 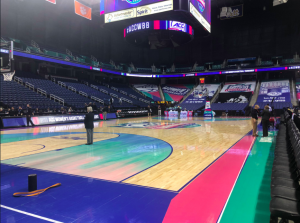 Despite a strong first half, the Pittsburgh Panthers fell 86-64 to the Duke Blue Devils Wednesday night and were eliminated from the ACC Tournament in Greensboro.

In a low scoring first half, the Panthers came out to an early lead, but the Blue Devils battled back to tie it and eventually take the lead 16-13 going into the second quarter. Danielle Garven found her stroke in the first quarter hitting 4 of 6 from the field to keep Pitt in the game. The second quarter was more of the same. The Panthers looked extremely hot to start the second, going on a 11-5 run to take the lead back early on, but Duke again was able to fight back to gain advantage. All in all, the first half was a war, going back and forth all the way to the last minute, however Duke stepped on the accelerator to end the half up 36-32. Pitt’s three point shooting was key in the first half to keep them in this game, shooting 5 of 10 from beyond the arc. Meanwhile, Duke’s nine turnovers in the half kept them in check and allowed Pitt to keep this one close going into the second half.

The second half did not start well for the Panthers, with Duke going on a 10-2 run to open the third quarter. The Blue Devils never looked back from there, ending the quarter up 61-43. The Panthers continued their second half woes in the fourth only shooting 11-32 from the field. Duke, on the other hand, only got hotter, scoring 50 total points in the half and advancing to the second round of the ACC Tournament.

It was a tough ending to a trying season as the Panthers end the year 11-20 after winning two games in the ACC. Despite a rocky first year for Lance White, the future looks promising. Next year, Pitt looks to keep improving as White continues to gain experience as an ACC head coach.