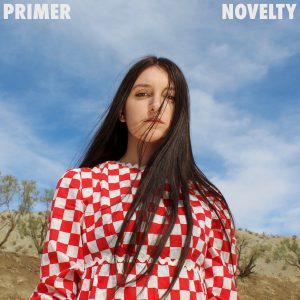 I was excited about Novelty by Primer before I even pressed play. Some of my friends had raved about her work on Parts, and Primer’s “about” section on Spotify claimed that Novelty “brings to mind images of a dystopian disco.”

Unfortunately, Novelty is, at its core, too low-energy to do what it wants to do. The average tempo of this album is far slower than most indie pop albums, with many tracks below 100 bpm, and few tracks above 120 bpm, let alone 140. The melancholic themes often focus on emotional paralysis and emptiness, and even though these themes are interesting, they’re inherently conflicting with Primer’s approach to indie electro-pop, which is sonically grand, and which subtly begs to be more upbeat. This is the frustrating overlap of two would-be amazing musical endeavors.

The first of these endeavors is Novelty’s electro-pop aesthetic. Primer’s voice is magnetic, with the same simultaneous openness and fullness that drew me and so many others to The Smiths. She commands powerful drums that firmly support each song, especially in half-time impacts, of which Novelty has many. Primer makes dense, immersive soundscapes to support high-pitched, usually twinkly synths that frequently bear the melodies. I also need to specifically shout out how amazing Primer’s cover of “Til I Die” by The Beach Boys is, because I hear so many covers that are too close to the original, or too far from the original, but Primer’s cover has this Goldilocks balance while fitting in seamlessly inside Novelty, against seven other Primer originals.

The second of Primer’s musical endeavors on Novelty is the collection of melancholic themes. This actually would be a justification of the tempos, since Primer often focuses on emotional paralysis, alongside the opening and closing of emotional voids. In “My House,” she asks an ex to come to her house because it’s been “five years since [she’s] had company.” I’m typically fascinated by artistic explorations of emotional paralysis and stagnation, but Primer falls into the trap of letting her music occasionally slip into the boredom and frustration of the phenomena she’s trying to describe. This slight and impossible-to-quantify error occurred throughout the album, and really ruined the entirety of Novelty for me, despite how much amazing talent and thought went into this album. What a shame.