“what album is this on?” – a guide to early Alex G 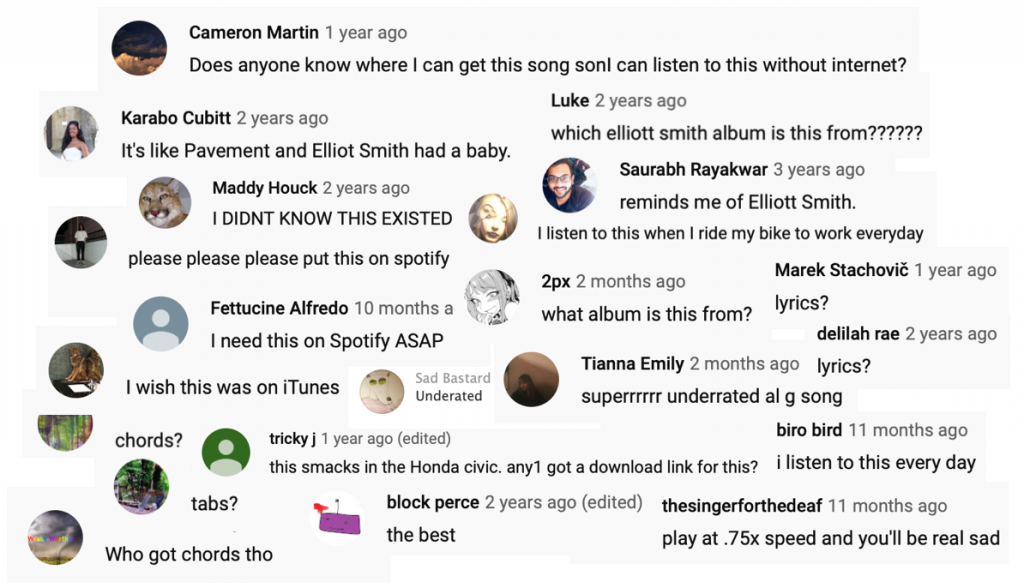 Tomorrow marks the release of (Sandy) Alex G’s eighth studio album (House of Sugar) in a decade. He has one of the best discographies in modern indie, but suburban, Gen Z nostalgia-junkies (such as myself) find a distinct allure to the hundreds of unreleased finished pre-(Sandy) tracks floating around the internet. DJ YouTube sidebar shows us what’s what as we slide from mystical narratives to primal punk songs to industrially-tinged pieces, watching the memories of our internet-age youth play before our eyes. These album-less tracks (save for their place on a handful of fan-made compilations) are marked with seemingly algorithmic comments: “this is his best song,” “please put this on spotify,” or some pensive story of listening to the song everyday for months. These songs are hailed by many, but entering this wealth of uncategorized music (with no clear starting point) is no easy task. To correct this, we here at WPTS offer our completely subjective takes on some of our favorite unreleased/early Alex G tracks.

Alex G’s music has always felt familiar to me. Hearing it is like remembering. The funny thing is, I didn’t know I had forgotten anything.
His songs are like memories. Like dreams I’ve had, people I’ve forgotten, experiences I can no longer recall.
Then I hear the music and I remember.
It’s sentimental. Like listening to time passing by. Like hearing myself growing up.
It’s like trying to hold on to something I can’t quite reach. Then I realize that I am not supposed to reach it. You can’t hold onto the past. Life is about letting go, and that’s what his music has helped me to do. To let go, but to keep the lessons that I learned and the feelings that I felt.

“I’m not like the other girls,” maybe that is true.
This is one of my favorite tracks by Alex G.
It’s sad and it’s beautiful. The lyrics tell a story, a story that I know all too well. It reminds me of a time in my life that I usually try to forget. Of the thoughts and fears that used to plague my mind.
Don’t leave me alone. Leave me alone.
It’s an internal struggle; wanting to be alone almost as much as you fear it.
It’s a terrifying thing to be afraid of your own mind.
But this track reminds me that I am not alone. That I was never alone. And that is a beautiful thing. That is something that I will remember. That is a memory that I am going to keep.
I’m not like the other girls. That is true, and I’m not sorry. –Sarah Worthington

Hole in the Ground

In traditional unreleased fashion, Alex combines his vague storytelling lyricism with acoustic guitar and (for most of the time) non-traditional drums to create a track that floods you with this feeling of paralysis that comes after breaking ties with someone close to you. Letting the part of yourself you have buried out of the “hole in the ground” is a familiar feeling that Alex G manages to translate into music flawlessly. –Alex Gosek

I wish I would have uncovered “I Remember You” earlier, but I really feel like I found it at the perfect time.
It set up shop in my ears when I was having a bad week,
one full of frustration, sleep deprivation, and confusion about why things happen the way they do.
The second verse really hit me that day; I read it as an honest view on being in a mental rut and being unrealistically hard on yourself.
But it’s really the last line there that caps the self-awareness off with
a weird youthful confidence that transported me to being a kid again:

My brother would always yell at me for lying on the floor of any room when we were kids, and it always upset me because he just didn’t get it.
The floor is insanely comforting, especially when things seem to be going wrong.
Maybe it’s because when you’re on the floor, you really can’t get any lower,
things can’t get worse,
all you can do is soak it in and take a look around.
Alex captures that sentiment perfectly.
His ability to infuse simple language with rich meaning is on full display here,
and this style allows his songs to exude a high level of humanity and be so relatable, time and time again.
–Nick Jacobyansky

“Nintendo 64” has got to be one of the G man’s best unreleased tracks: Alex’s classic storytelling finds its way into some truly dark, frightening imagery, weaving between corrupted childhood and nihilist adolescence. “I’ve been taking lots of drugs cause they teach me not to care/ Yeah I guess that’s how you cheat because life doesn’t play fair” are some of Alex’s saddest, most impactful lyrics. The songwriting here may not be as experimental as some others, but the simplicity is what makes this song great. It allows the listener to focus on the heavy, moody lyrics. This is a great intro song to Alex G, showcasing his ability to bottle an incredibly complex feeling, and it also really makes me want to give him a hug, hope you’re doing okay Alex! –Dylan Falk

“Fay” is one of Alex G’s newer (and weirder) unreleased tracks. Alex’s unreleased tracks always give an interesting glimpse into his songwriting ability and allow us to listen to his songs outside the context of an album. “Fay” loops the lyrics

“Here they come knocking at my door
Wee-ow-wee-ow-wee-ow
What’s the problem officer,
What’s your knocking for?”

on top of bass-heavy instrumentals. Alex pitch shifts his voice up a few keys to reach a child-like tone, causing “Fay” to sound like a nursery rhyme. Alex G holds a special place in my heart because his songs always give me a sense of nostalgia. “Fay” is able to transport me back to when I was younger and spent my days at the playground singing nursery rhymes. This song could have easily fit onto my favorite Alex G record, DSU, but there is something special about the added challenge of finding his unreleased music on my own. –Alyssa Davidson

Pennsylvania summers are soft bodied lightning bugs
where nighttime falls like a gentle dream.
And there, in the midst of expansive star lit suburbs
with my heart driving his 2004 Subaru Forester
and Alex G whispering unreleased,
we pulled into the bowling alley parking lot.
And it was in this sentimental realm,
nostalgia a dulcet whisper, that “Skating” started to play.

“Somebody was waiting
for you at the skating
rink last night I hope you know.”

With the tender darkness enveloping us like a blanket,
you parked your car and started singing along, softly.
And it was funny how perfectly placed everything felt—
how lost in timelessness, the bowling alley sign
hanging in the sky like an artificial moon. With the warm
summer air a whisper on our skin
and your hand in mine, we moved inside.

“I feel underneath the weather
yeah I had felt much better
before I started talking to you.
We’re a waste of time,
We’re the worthless kind.”

There we were, “Skating” playing in our heads
on repeat (me, mouthing the words every round
I bowled; you, body moving to the hidden rhythm)
a secret between us,

Funny now how misplaced the words were,
how that moment felt so redolent of summer
camp romance. Maybe it was the rhythm that
captured us, the soft and cyclic instrumentals a
genial warmth, alive and in our bones, a string between us.
So now, when Skating starts to play I feel those moments
as they wake up, an ode to summer and the love we feel.
–Eden Petri

Perhaps my favorite YouTube-core/SoundCloud Alex G song, my manz truly pops off on “Treehouse.” Although he doesn’t actually sing in this one, Philly indie cohort Emily Yacina sounds amazing. The lyrics will remind you of swingsets the summer before third grade, nostalgia playing a huge role on this gem. This truly was my favorite song of my senior year of high school… with only a minute and thirty seconds of content, “Treehouse” manages to encapsulate the feelings of a childhood you’ll never get back, each memory floating by in a wispy snowglobe. –Kiara Alvarez

“I know everyone can tell I’m an empty shell”

Alex G is one of those artists who’s constantly making full length albums while constantly writing and performing songs that don’t make the album. This is one of the many reasons why I personally love Alex G. A lot of my favorite songs of his are the heavier tracks and more lofi tracks, that frequently get ignored as favorites. “The Same,” a track off his Bandcamp debut Race, is a song that embodies what I love about him: lo-fidelity vocals along with a beautiful, cathartic build. This song also manages to have two halves, one soft and acoustic the other frustrated. This song is annoyed at wanting things to stay how they’ve always been, but also having things change regardless. –Elyssa Pollio

House of Sugar by (Sandy) Alex G out 9/13, you can get it here.
Edited by Spencer Smith & Nick Jacobyansky