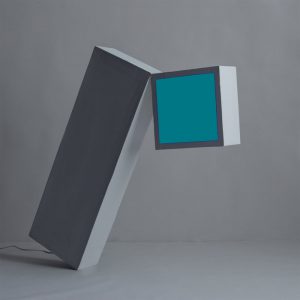 It’s always nice when trends come back around on the endlessly spinning wheel of fortune that is our culture. In any case, it now seems to be the turn of a certain misunderstood strain of new-wave rock best exemplified by bands such as DEVO and the B-52’s; and why shouldn’t it be? The bright, manic, art-rock music they made – with its staccato, robotic guitar riffs and parodic/obsessive relationship with technology and American consumer culture – is in many ways more at home in our current time than it was in their own. Don’t worry disco faithful, I’m sure it’ll be your turn eventually.

Bands like Uranium Club and Parquet Courts have at least dabbled in reinventing this particular style for the modern age, but Endless Scroll, the new LP from New York post-punk outfit BODEGA, is the purest distillation of the style to date. The crucial difference between BODEGA and these earlier groups is directness of approach. Where DEVO delivered their manifesto against consumerist culture through a carefully constructed façade of kitsch, BODEGA have no interest in beating around the bush. The band takes a baseball bat to the pretension and artifice of our modern age.

The best example of this may be on the forty-nine second track “I Am Not a Cinephile” which takes aim at know-it-all performative nerd culture thusly: “Look to the screen for inspiration/How to live a richer life/Just how to collect and categorize.” And begins and punctuates itself by emphatically declaring “I am not a cinephile, motherf*cker.” BODEGA are also capable of leaning into their predecessor’s more danceable, fun loving sides on songs like “Gyrate,” which makes exemplary work of a lead vocal change to create a legitimately infectious dance track.

Of course, if you’re going to approach a problem as complex as societal degradation under late capitalism with this much manic energy, you’re inevitably going to end up with some well-intentioned misfires and Endless Scroll has its share of those. Ironically it’s when the band goes away from their more hyperactive tendencies that they tend to lose me. Songs like “Jack In Titanic” tend to meander and bring down the energy of the total package.

All in all though Endless Scroll is still a very nice surprise from a band that seems, to my ear, to be going places.

This album is best enjoyed while arguing with a stranger on the internet.